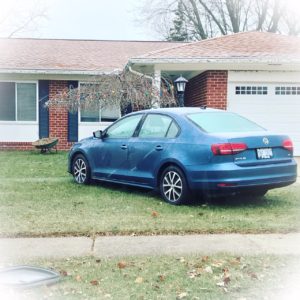 There are few things I enjoy talking about more than traffic. I would be a great traffic reporter with my added commentary on how badly people are driving all over the city.  I think a lot of people would be interested to hear about the asshole driving too slow in the left lane of the freeway or the guy who ran the red light in front of Starbucks and almost took out a gaggle of teenage girls in the crosswalk. When I talk to my husband on the phone while I am driving he often has to tell me to shut my pie hole about all of the horrific drivers surrounding me.

I am by nature a people watcher and I am fascinated by how much people struggle with simple things like spacial relations. In my mind, this kind of stuff is interesting to other people as well. I know I am mistaken, but I keep sharing my observations. Unfortunately, when I am not providing commentary on the highway happenings to my husband, I am sending him photos of cars parked askew as if they let their dogs attempt to drive. He gets pictures of the old men parked at the gym halfway between a handicap parking place and the sidewalk and the soccer moms at Target with their minivans overlapping two spots. The best photo I even sent him was a car on the front lawn of a home near my parents’ house. It looked as if the car was dropped from the sky or rolled into the yard. I had all kinds of crazy stories going in my mind to account for how this little blue car came to rest in the middle of a front yard. 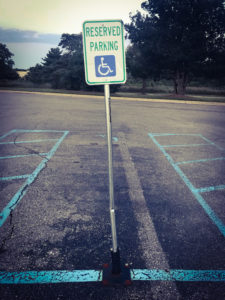 My daughter is also a driving critic. She was backseat driving before she could talk. She has called out things like “green means go buddy” and “that lady can’t stay in her own lane” more than I would like to admit. She notices the same kinds of things I do and has almost as much commentary on it. One day a few months ago we witnessed one of the funniest driving incidents ever. We were at the library where they held a farmer’s market every friday sitting on a bench sharing some grapes as a car pulled into the lot and attempted to park about 20 yards from us. We watched as the female driver pulled into a handicap spot but instead of parking she drove directly over the sign standing at the front of the spot. Strangely, the sign sprung back up after she flattened it down into the pavement. The base of the sign was literally a spring so when the car passed over it, it flattened out and popped back into place. This was accompanied by a screeching sound as the metal sign scraped the bottom of the car. The woman proceeded through the parking lot and into another space as if nothing had happened. The only evidence that she was aware of what she had done was the flush of her cheeks as she walked past us into the farmer’s market. She looked around her as she got out of her car and saw about 50 people staring at her. I think I would have had to say something like “did you see that sign jump right out in front of me?” or something similar, but this lady just went about her business which leads me to believe it was not an unusual occurrence for her.

The best part about seeing this incident with my daughter was that she could go home and tell her dad all about it. She bounced in and giggled her way through the whole story. Not once did he tell her that he didn’t want to hear the traffic report like he does to me. He laughed along with her. I think we have a new traffic reporter in the house.

Adventures on the High Seas (or something like that…) 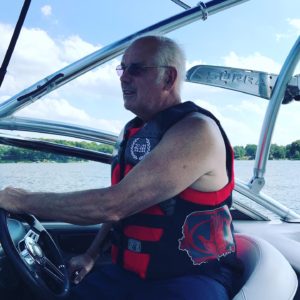 It’s been awhile since I have written about our lake experiences. This isn’t because we haven’t had any, I have just been giving my dad a little break from the abuse I dish out when it comes to boat stories. But alas, there are too many stories to share about the captain and his high seas adventures, so my hiatus is over. If you are reading this, Old Man, just turn off the computer now and go back to watching ESPN or Sherlock Holmes, or anything else. Just avert your eyes from the screen if you can’t figure out how to turn off the computer. For future reference, you can just close the lid and this will all go away.

The first time I saw the boat this past summer it was being towed in by the neighbors. The same neighbors who come to the rescue every time we experience water related ineptness were pulling my dad’s boat as he sat on the bow. When they got close to shore the boat was cut loose and smoke billowed out behind it as my dad cranked on the engine to pull into the boat slip. The best part of this was that the lift sits too high in the water so he has to pull the boat in kind of fast or it doesn’t make it far enough onto the lift. It’s always an awkward maneuver the first few times each year and the smoking engine did not help matters. It literally looked like he was trying to jump the boat right over the dock as he pulled in. It was like a giant smoking cannon ball headed toward shore.

After the boat was successfully docked we realized that the company that had stored it all winter had either left it outside uncovered or had been allowing homeless people to sleep in it because the interior was filthy. Apparently “Skipper Bud” was smoking a lot of bud while caring for my dad’s boat. We had been informed that we couldn’t pick it up the week prior because they hadn’t done a final check on it yet. I guess they never got around to the final check or an initial check for that matter. Or maybe they were just too stoned to notice the smoke pouring out of the engine. It’s possible that they left the boat parked right in their driveway where we left it last fall, cashed my Dad’s check and immediately closed for the winter. Needless to say, we were all pretty annoyed as well as perplexed. 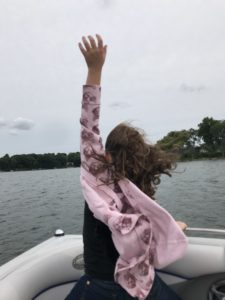 It took a few weeks to get someone to repair the boat properly and get us back on the water. But we finally did get back on the water, and every time out I looked forward to pulling back in to shore. This is because during every ride my jokes about my dad’s parking skills got better. I would like to say his parking skills got better as well, but they still remain questionable. Some of my better comments included:

“Maybe the 8 year old should give it a try. She can’t be much worse.”
“At least you didn’t hit the neighbors dock!”
“Maybe we should just leave it out here and swim back.”
“Your eyes are closed, aren’t they?”

It should be obvious to me by now why he tortures me with the work he asks for help with. I guess I would do the same if some little asshole kept terrorizing me. The difference is I would let that person know I was torturing them. He keeps trying to pass off all the work we do at the lake as bonding time. He says things like “if we didn’t have all this work to do, when would we spend this kind of time together?” I remind him that I’ll visit him plenty in the nursing home.

We took the boat back out of the water a few weeks ago along with the wave runners, the dock and the lifts. It was a two weekend process as usual and after doing the math, my husband and I discovered that we actually spent more time getting the boat in and out of the water than we did on the water this summer. This is not including the many joyous minutes of parking time spent drafting new material to poke at the Old Man. I would complain more but, but what can I say, I enjoy the bonding time.

I wrote this while listening to one of my all time favs!