Keeping up with the Amish 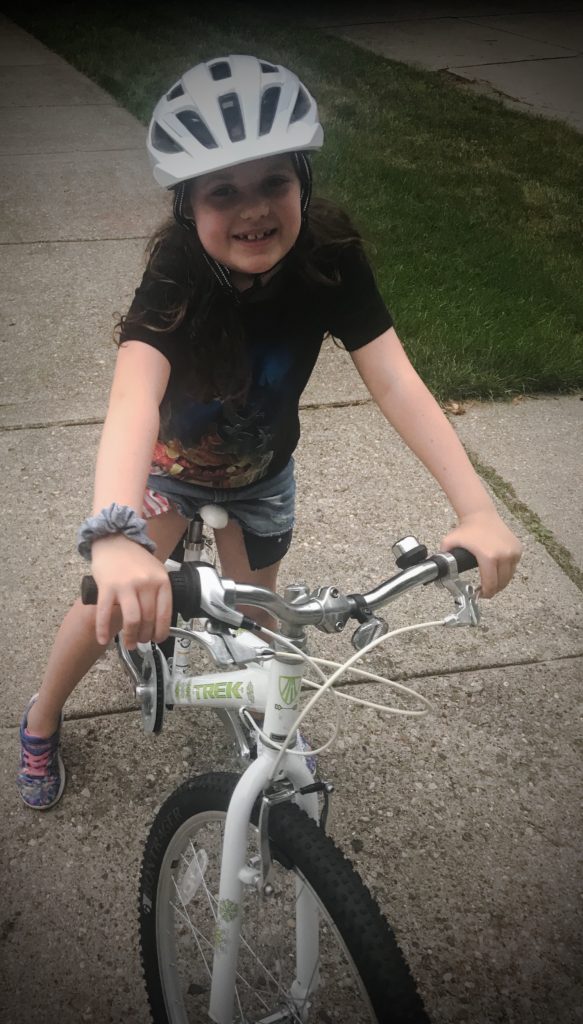 At the beginning of the summer I had all kinds of plans for my child. Some of the plans were just for fun, like spend a day at the zoo and check out the zip lining place that we’ve been meaning to check out for two summers. Other plans were more practical, like teach my kid how to tie her damn shoes already. Sometimes I am amazed at my laziness as a parent when it comes to the little things. My husband likes to remind me that our child has been cooking since she was four and reading a year later. But I still cringe when I think about the things she can’t do, like tie her shoes, ride a bike unassisted or roller skate.

As part of some unseen action plan, my dad took mini-me out to buy a bike last weekend. I’m pretty sure this is his way of telling me I am slacking as a parent. He bought her a baseball glove last year and a scooter the year before. This is also coming from the man who put a fur hat on me as a helmet when I was a toddler and padded me up to shoot hockey pucks at me when I could hardly walk, so I’m not going to read too much into it. She got a pretty little white Trek with lime green flowers on it. Her last bike was also white and looked as new the day we got rid of it as the day we bought it. She walked it around the block on occasion and spent many hours packing and unpacking the cute little purse on the handlebars, but even with the training wheels on it, she was terrified to ride. When we forced her to go for a trip around the block she stopped at every corner dismounting her bike to turn it. She was afraid turning the handlebars more than a millimeter would topple the whole package and she didn’t want to get run over by her own bike.

She is behaving much the same with her new, bigger bike. She sits in the driveway ringing the bell and walks it up and down the sidewalk. At least now she actually straddles the bike while walking it instead of standing next to it like it’s a puppy she’s taking for a stroll. Her dad had to cover the pedals with washcloths and duct tape to prevent them from scratching her legs. I’m not entirely convinced she will ride the bike even after seeing her balance on it while coasting for about 50 feet. All I can picture is the episode of Friends where Phoebe is finally learning to ride a bike as a 30 year old.

My child can be great at 100 things but the 3 things she can’t do will take a sledge hammer to my self-esteem. I feel like I am a total failure as a mother when my kid can’t get the little bunny to go through the hole with her shoe laces. Or maybe the bunny is supposed to go around a tree. Or maybe it’s just bunny ears that are supposed to be tied together. I’m not even sure, which is probably part of the problem. Regardless, my kid might still be wearing Minnie Mouse velcro shoes in high school if I don’t get it together and teach this kid how to loop, swoop and pull. This is the stuff that keeps me up at night and keeps my therapist in business.

After realizing summer is already half over, I have been attacking my to do list like a sniper in a bell tower mowing down college students. I have been knocking off trips to the zoo and the movies while reading multiplication tables out loud and picking up books from the library. We spent the morning at our local historical museum where we walked from building to building with no indoor plumbing or electricity and antiques like chamber pots and looms. In a log cabin a woman dressed as a pilgrim demonstrated a toy that essentially taught children the motion to milk a cow. It was a little monkey that climbed two ropes when you pulled them. As my daughter struggled to get the monkey all the way to the top all I could picture was myself lounging on a hay-stuffed couch crying to a pioneer therapist about how my family would probably starve because my daughter was never going to master her milking skills. Luckily there were no sheep shaving games or carrot harvesting challenges or we probably would have been asked to leave due to gross incompetence. We would never have survived as settlers.

I have decided that I need to put a few things on my own to-do list and the first thing is quit freaking out about insignificant shit that I won’t remember worrying about five years from now. I like to put things in perspective by thinking about how I will look back on them in a year or five years. It helps me realize what is worth focusing my attention on. Instead of wasting my time worrying about how I am going to find shoes for my daughter to wear to gym next year, I’ll daydream about her attending Harvard or Yale. Of course she will be wearing her velcro Hello Kitty sneakers as she pushes her bike to class, but she won’t starve!