Let’s Go To The Mall 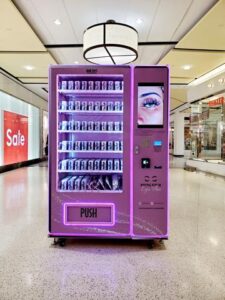 Apparently I have not been out of the house in too long and life has changed quite a bit while I was taking this self-isolation thing to a whole new level. My daughter dragged me to not one, but two malls in 48 hours and I have discovered many new and horrifying things.

First, there are vending machines that sell false eyelashes. I shit you not. Vending machines stocked full of spidery looking little beasts in plastic cases. The first thing my daughter asked was “where is the glue?” I thought she meant what people must be sniffing to make them shove a credit card into a machine and wait for it to spit out some eyelashes at them. My first question was who is walking through the mall thinking “you know what would make this experience better…. giant fake eyelashes!” I mean, are that many people experiencing the loss of lashes while shopping that they need vending machines? I would have thought this was a joke but there were multiple machines at this mall containing thousands of eyelashes. If they are going to be dispensing beauty supplies in the same fashion teenagers buy chips and soda, I would prefer it be something useful like a nail file. I broke two nails carting around my kids’ bags and couldn’t find a file to save my life. You would think I was in a prison, not a mall. Although the similarities of the experiences are strikingly similar.

The second thing I learned is that there are no actual stores at the mall. All I wanted was a new pair of Chucks and the Converse store is apparently only open half the week. Most of the clothing stores I was planning on shopping at had signs on their closed gates stating their limited open times. Strangely, the store that sells wedding and prom dresses straight from the 80s was booming. I guess big lashes and big dresses are all the rage. The pretzel place that smells like barf was closed which was the only saving grace. The stores that were open were only about half stocked. We went into at least three stores that had nothing in my daughter’s size and about half of the selection that I saw online the week before.

Somehow, in the last two days of putting in 20,000 steps at the mall I managed to schlep home a carload of bags full of landfill and sugar. My kid now has enough fidget toys to keep her hands busy for the next 10 years and I am going to have to walk around the planet to burn the calories packed into the multiple bags of candy we picked up. No wonder all of the stores are closed. They are busy widening all of the waistbands after we sit on our fat asses eating truffles and playing with stress balls.