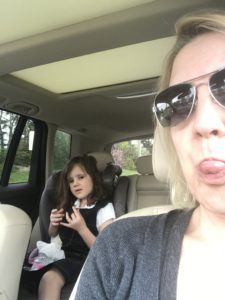 It’s amazing what you can learn on a seven minute drive. Every morning I feel like I gain a wealth of knowledge from my 8 year old passenger. Most of this knowledge is about the best books in the orange dot level at the library or which girl’s feelings were hurt because another girl didn’t want to sit with her at lunch. I get the gossip about who may or may not have had lice and who is telling people she is related to Beyonce (she isn’t).

I rarely get information I can share at a dinner party. I am always looking for this type of data since I suck at small talk. My conversation starters are usually “So, who is your favorite serial killer?” or “I used to have to wear leg braces to sleep at night when I was a kid. Weird huh?” So, this morning when my daughter asked me if I wanted to hear all about Walt Disney, I was like hell to the yes I do!

Unfortunately after reading all about Walt’s life, her knowledge consisted of three things which she listed for me. He was born in 1901 and died in 1966 of lung cancer. He married a woman he worked with named Lilly. They had a daughter named Diane but they didn’t like her so they found another baby. When I asked her to elaborate on the part about the children she said she forgot what the story was but they had a baby and they didn’t like her so they got another baby. I asked what they did with poor little unlikable Diane and she said she had no idea. She did wonder how parents couldn’t like their own baby though. I had so many questions and she had so few answers.

Unfortunately we arrived at her school before I could dig a little deeper into this story, so I had to go home and google the whole Disney child situation. The story as presented led me to believe Walt and Lilly had a child and gave her up for adoption and then later went on to have another child. This was not at all the case. They had a biological child named Diane in 1933 and then adopted a child named Sharon in 1936. They loved both girls and doted on them. Apparently Diane made them love parenting so much they expanded their family and gave her a sister. I was happy to know that Walt and his wife were not the type of people to dump their kid and trade her in for a new one. That would be like learning Mr. Rogers was also the Zodiak Killer.

I guess I am going to have to share with my kid what I discovered. It’s these little bits of useless information that nestle into your brain and I wouldn’t want her sharing that Walt and his wife traded in their first child for a better one at a dinner party with her boss twenty years from now. Either that or I just tell her all about the little girl we were thinking about adopting next time she acts like a little asshole. I haven’t decided yet.

*I wrote this while listening to some good old fashioned Christmas music!