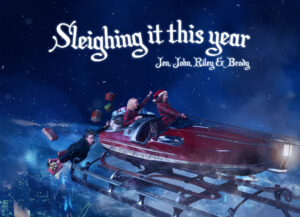 I don’t know if I mentioned this before, but my family does everything a little over the top. We are an all or nothing kind of family which means I don’t sleep from Halloween until about January 3. My husband literally packs up the hand painted trunk or treat decorations and starts planning the theme for our annual Christmas card while I walk around the house with a glitter filled fire hose decorating and baking enough cookies to feed half of South America. Some years the theme for our card comes quickly, some years we have to brainstorm for a month, but we always have at least one theme that would offend half of our friends and family and my husband tells me no repeatedly while I beg him to hide a little easter egg of something offensive in the background. He and I have a different idea of “holiday cheer” sometimes. 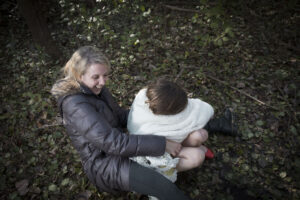 Some past themes have included snowball fights, plans to kidnap Santa and baby Riley dismantling a tree. I think my daughter’s favorite was the year we strung her life sized bear up in the woods so she could have a winter wonderland themed party in the snow wearing a ball gown. She especially liked that I had to carry her into the woods to save her shoes and keep her bundled in a fur blanket until our perfectionist photographer was ready. I literally fell in the snow and used my body as a mattress to save her highness from wrinkling her dress. She really became the part that year, making demands like a seasoned super model. I was lucky to have walked away without having a cell phone thrown at my head.

My favorite card to date has been the Elf on a Shelf takeover, mostly because it took a full day to shoot all of the photos used, and I got to play little elf to the photographer. We used 2 toy elves to create 100 of the little monsters destroying our family room, climbing shelves and ziplining from the fireplace mantle. There was even an elf wielding a cocktail sword holding the child hostage. Plus, she had to stay still tied up in lights for a large part of the shoot. I spent the day climbing ladders, hanging elves from fishing line and keeping out of the shot. The best part about this card is that we don’t even have an elf in our house. We don’t do that cliché bullshit (although I may get myself a Snoop on a Stoop next year).

Based on the feedback we have received so far, our card this year has topped all others. Maybe it’s the magic of it, or the fact that we actually have the whole family in the photo for the first time ever, but the consensus has been that this is the fan favorite. I am the first to admit that I participated in approximately 3 minutes of the making of this card when I sat in front of the green screen that resided in our living room for a month. I didn’t even lend a hand when my husband was photographing himself flying through the air. Believe it or not, he took that photo entirely on his own. I was probably in the kitchen elbow deep in powdered sugar at the time. But sometimes that is how it works, and the final product is even better than expected. I wish I could say the same about my cookies this year. They are still a work in progress…