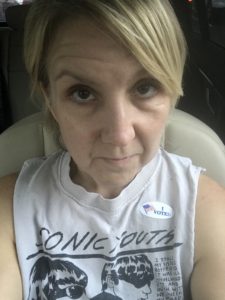 I love our new gym. It’s full of old guys and soccer moms. Last week, one of the old guys walked up to me while I was about an hour into my ride on the elliptical. He stopped next to the machine with a big smile and said “I see you here a lot. I come here a lot too, so I like to meet the people I see every day. My name is Jack.” I introduced myself but he was a little hard of hearing and kept repeating my name back to me as different words like gent, jan and gin. I finally spelled it for him J-E-N to which he replied “oh, short for Janet!” When I told him it was short for Jennifer he looked at me like I was nuts. I just smiled and kept jogging.

Before walking away he said “Oh, and I have dementia, so we will probably meet over and over again since I might not remember this conversation.” I told him I looked forward to it with a smile. You have to love a guy who has a sense of humor about his condition. It reminded me of something my Dad would say.

After a week of being away, I visited the gym yesterday and who did I run into – my best bud Jack. I was thinking about what new characters I could introduce myself as when he walked up and said “let me see if I can remember…. Jan, right?” I replied “Close, Jen” using my best midwest flat E. He leaned in a little closer and said “Jan, that’s what I said!” I guess I should have expected it after it being the name that appeared on my Starbucks cups all week on vacation. Maybe it’s time to head to Staples for some name tags. That or the Secretary of State to fill out the paperwork to change my name to Janet.

*I wrote this piece while listening to my daughter watch TV after being away from YouTube for a whole week! 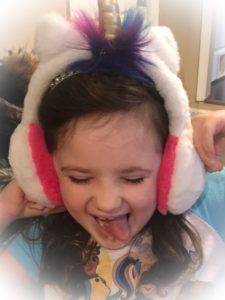 I walked in on a conversation between my husband and daughter last night about how all the kids in her class are talking about swear words. I have been hearing about this for months so I was a little surprised that she hadn’t brought it up to her dad yet. Maybe it’s because they just went to see a movie over the weekend where she spent much of the time covering her ears so as not to hear any swearing. I know this is hard to believe, but she doesn’t hear the f-bomb a lot. I clean up my gutter mouth around her as much as I can. Also, she usually doesn’t really listen to me.

Somewhere along the way she started telling me some of the foul language in the movie. She said someone said “beep-hole” which I interpreted as asshole. But then she said it was the “S” word and I was confused. So as my mind was trying to work out why someone would be calling another person a shit-hole, my husband said “like look at this dump. This place is such a s-hole”. I started laughing that I couldn’t figure out the context. So I said “Oh, I thought it was the ‘A’ word” which was met by a puzzled look from my daughter. I quickly said “A for awesome” to which my husband responded “yeah, your mom is called the ‘A’ word a lot!” I couldn’t argue.

I never would have thought that by the age of 8 my daughter would not have heard at least a dozen four letter words from me. I’m pretty proud of this. Especially considering she told me a girl in her class told everyone how she overheard her Mom say “I f’ing hate you!” to someone. Not to be outdone, another little girl claimed to say the “S” word to her parents. I’m wondering when she is going to ask me to hear the George Carlin recording of the 7 words you can’t say on the radio.

This morning I asked her why she and her friends talk about swear words so much. Being as insightful as she is she noted that it was probably because they weren’t supposed to say them. I told her this was true and I would be upset if she were swearing, but she really shouldn’t feel bad about hearing the words every now and then. She told me she knew this was true or I wouldn’t be listening to all of the music I listen to. She told me that she was happy that she didn’t have to be disappointed in Tim Timebomb for using foul language. She may not listen to me but she does listen to what I am listening to!

This piece is brought to you by lots of f-bombs!

My dad is a do-it-yourself kind of guy. He cuts his own lawn (at two houses), paints his own walls (naked), installs his own dock and boat lift (with minor disasters) and does his own bathroom renovations. And for as long as I can remember I have been his trusty assistant. When I was younger he had to bribe me to help, now I have to bully my way in. He is getting older and I don’t want him to break a hip or anything. If he did, I may have to figure out how to finish the project alone!

My dad is currently renovating the master bathroom at his lake house. It’s a fairly large undertaking since he is moving plumbing. He started demolition last week. Of course I have been there for a lot of it. Destruction is kind of my thing. I got to go swing a sledge hammer at walls for hours at a time. That’s not work, that’s therapy. One day while I was hammering out six inches of tile and cement my dad thanked me for my help. I thanked him for my anger issues which were clearly driving that work vehicle. Truth be told, my dad is one of the few people who doesn’t invoke anger in me.

Home improvement projects have always been a family affair. I grew up with a hammer in my hand and we are trying to place my daughter on the same path. We have attempted to include her as often as possible in work projects. Unfortunately, she doesn’t yet have the kind of anger issues that would lead her to hammer therapy, but a few more years with me should do it. My dad gets her to work with him by paying her. Bribery has always worked with her too. He gets this child to pick up filthy seaweed from the shore in the summer and crusty old leaves in the fall. It’s amazing to me since I can’t get her to pick up the clothes from her bedroom floor, allowance or not. 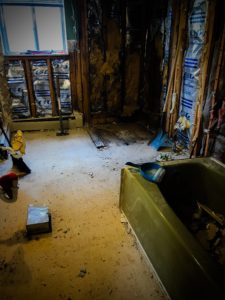 Today she came out to the lake after school to help demolish some walls and haul out the trash. She actually wanted to work and took part in every aspect of the project. I did have to take a broom away from her after she almost sterilized me while I was facing the opposite direction. I’m not sure what she was trying to sweep but she managed to position the handle in between my legs and pull up at the same time. Luckily I am still quite a bit taller than she is or some emergency room worker would have had an interesting story to go home with tonight.

After a few hours of hard labor we called it quits and headed home. As soon as we got in the car my daughter asked “am I getting paid for this? Grandpa always pays me.” I told her she had a choice, she could either be helpful and do the work for free like the rest of us were doing or she could get paid. The catch was if she got paid she would have to pay my dad every time she used the bathroom in the future. I thought that was a fair trade. She responded with “how much would it cost to use the bathroom?” At least she is using her math skills!

I wrote this piece while covered in dust and listening to Ratboy (how appropriate).