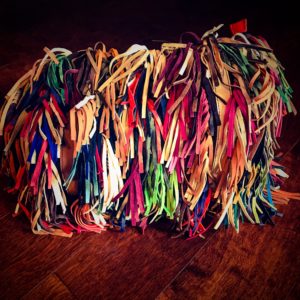 I attended a charity fashion show last month where there was a purse auction. My mom, daughter and I all bid on purses in between sipping tea and scarfing down tiny cucumber sandwiches. Right before the end of the auction my mom actually outbid me on the purse I wanted just so she could buy it for me. She knew I wanted it, so she wanted to give me a gift. That, or she is just super competitive or has a bit of a spending problem. I’m not going to analyze her motivations, I got a great bag out of the deal.

When we came home my daughter was excited to tell her dad about the event. She was going on and on about how we “won” purses. As she was showing him the bags I butted in and said “actually, I didn’t win my purse, my mom outbid me and bought it for me!” to which he replied “You mean you PAID for that purse?!” I told him that technically my mom did, but yes, money was exchanged. He just shook his head as he turned the bag in circles, looking at it from every angle. He has since named it my Fraggle Rock purse. Apparently he thinks it’s ugly and reminds him of a cartoon character from his childhood.

I have now had this purse for about six weeks and have received no less than 20 compliments on it. Every time someone is on an elevator with me or passes me in the grocery store and compliments the bag I immediately text or call my husband to let him know. He asks things like “was it a blind woman?” “was she wearing crocs?” and “was it in that way that people tell parents with ugly babies how cute they are?” He clearly does not appreciate my purse. I have had a librarian call me back inside as I was exiting the library to tell me how pretty my bag is. I have also had a woman drive out of her way down an aisle in a shopping plaza to compliment my Mokey Fraggle. I couldn’t see either of their feet to check for crocs but they appeared normal enough. None of these women have been blind, elderly or wearing hospital gowns. One was even sporting the same Louis Vuitton purse I was carrying before swapping it out for Gobo. I know that my taste can be a little iffy, but in this case I now have scores of women agreeing that this is the cutest purse on the block.

My husband has more fun than he probably should teasing me about my choice of attire. I’ll admit I often dress like a teenage boy in sleeveless band t-shirts and ripped jeans. I also have a certain affection for plaid and anything with a hood. But most of my clothing is some shade of black, so the sheer amount of colors included in this handbag should have been call for celebration for my husband. I am not going to remind him of his ill-advised soul patch of the early part of the 21st century or his facial hair in general during our early courtship. I will also not point out that he wore only white socks for years. I am saving up all of my jabs for when he is elderly and wearing the same white socks with sandals or pajamas bottoms as pants. I am waiting until the day he buys a pair of loafers or a double breasted suit coat and then I am going to remind him of how he teased me about the work of art I carried on my arm. I’ll probably also be wearing pajama pants in public and possibly crocs by then so my words won’t mean much but I’ll be ready.