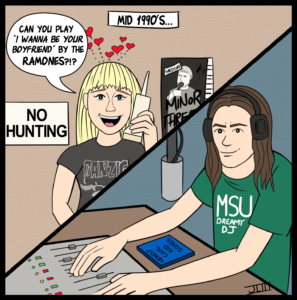 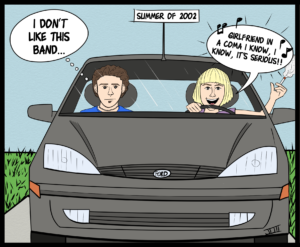 I was listening to the Smiths a lot when I started dating my husband. To stay mentally balanced I also listened to a lot of Hatebreed & Refused. When we moved in together our music catalogs also moved in together. Now, I’m not judging, but all of the “girly” music in our house belongs to my better half. It is unlikely that you would find me perusing the “Lilith Fair artists” section when searching for new music. If someone looked at our CD collection they would have thought it belonged to a middle aged woman and her teen-aged son. Unfortunately in this scenario, I am the teen-aged son. It was probably fairly disappointing to my husband that I did not also have the porn collection of a fourteen year old boy. 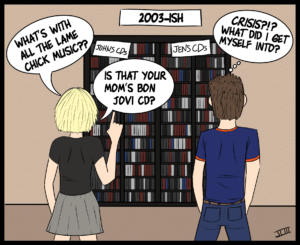 I think it’s fitting that we went to see Modest Mouse the night I found out I was pregnant. It was a band we had discovered together and both really liked. Little did we know, the fetus listening to “Ocean Breathes Salty” that night would be simultaneously amusing and horrifying us by singing a few lines from “Pistol” at the age of four.

These days my playlists include the music I love as well as the music that Riley loves. Luckily, Mommy’s little monster has pretty good taste. Maybe it was all of the Sonic Youth & Pixies she heard while she was cooking in my mommy oven. Maybe it’s the fact that a love of music is in here genes, and  her Dad’s gift is coursing through her as strong as it courses through him. Whatever the reason, I’m happy to report that we are spending a lot of time dancing to the newest Interrupters album.