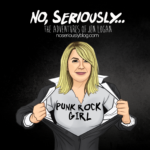 Excerpt: I went to a funeral yesterday for a twenty four year old woman. I think everyone would agree this is far too young to die. It was not mentioned in her obituary or at the funeral how she died, only that she died suddenly. “Suddenly”, it’s the code word for in a tragic way that we don’t want to talk about. I get it. If my daughter died because her demons finally won, I don’t know if I could put into words what killed her. I would want her to be remembered for the good she brought to the world, not for how she left it. I don’t know what I would feel if I had to say good bye to my child because the demons won even after we all fought so hard. I don’t even want to think about that kind of pain.What is so horrific to me is that this woman’s parents had to choose their words in writing an obituary that they never should have had to write. They had to swallow whatever rage and despair they felt for what took their daughter out of their lives forever because it wasn’t some socially acceptable disease like cancer. No matter the cause of death, it wasn’t her fault, it wasn’t her family’s fault, it wasn’t anyone’s fault.