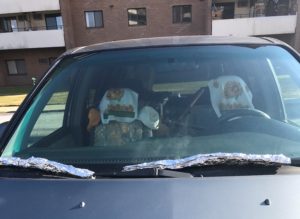 I am a firm believer in the idea that you do good things and you are rewarded. Today I was running errands with my mom. We are both members of a women’s organization that does volunteer work in our community. One of the projects we are working on requires us to set up artificial Christmas trees in public areas with a sign attached asking people to “decorate” them with hats and scarves and socks for people in need. We collect all of the donations over the holiday months and distribute them to different homeless shelters, group homes and warming centers. Today was the day we went to dismantle the trees and store them away until next year. While we were picking up the trees and all of the “decorations” I parked next to a minivan that appeared to be more of a home than a vehicle.

I probably wouldn’t have noticed all of the unusual things on this vehicle if I didn’t have to keep walking past it, but loading the charity trees and loot into my SUV afforded me the opportunity to walk by the minivan beside me several times. Each time I passed it I noticed something new. The first thing that caught my eye was the steering wheel lock. It was a giant bar across the wheel that was popular in the 80s. My eye was drawn from there to the sunflower emblazoned dishtowels draped over the seats and the gold lace table runners covering the seats. I went about my business wondering if the Sunflower King & Queen owned this vehicle. When I came back to my vehicle from the building on my first trip I noticed the soup can that was covering the exhaust pipe of the minivan. Yes, a soup can was placed over the exhaust pipe. All I could think about was how long it took this driver to put all of this crap on his car once he parked it. Between the steering wheel bar and the soup can he had to have spent ten minutes arming his car to fend off the alien invaders. 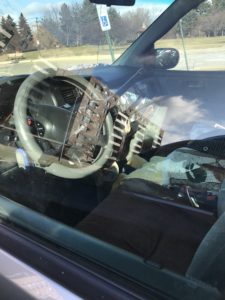 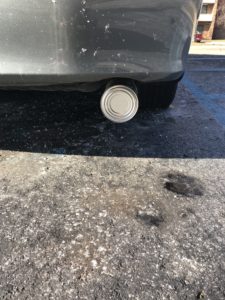 It wasn’t until I passed the vehicle the third time that I noticed the aluminum foil encased windshield wipers. I’m guessing these are not very effective against rain but might deflect the bolts of lightning coming from the space invaders chasing this guy. As I walked around the van I also noticed that it was being held together in many parts with duct tape. It was grey so it matched the paint. Foot long pieces of duct tape covered rust spots around the wheels and on the side of the van. It had several dents on the driver’s side. I’m not sure if they were from crazy pants running into things or if it was the aliens using a battering ram to break in and get their hands on the 250 count package of napkins on the passenger seat. Either way, the grey duct tape was surely going to cover up the damage. 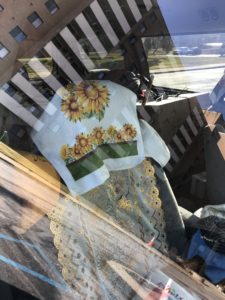 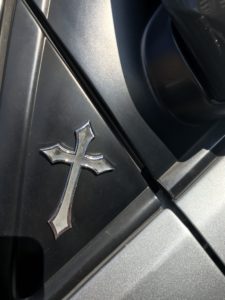 The cross magnets on the outside of the car and the stickers all over the dashboard had me wondering if the owner was a priest, but the spoon and opera program sitting on the passenger seat made me think maybe this person was a single guy looking for his partner. He had a lot of rubber bands and duct tape so I’m not so sure about his approach. I don’t know if the Sunflower King lives in the building or if he was just visiting, but it made my day to see this vehicle. I took a few pictures before jumping back in the car with my mom. I didn’t want either of us ending up in that passenger seat.

* I wrote this while listening to Bouncing Souls