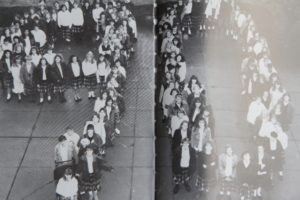 When I was in high school I got into a lot of trouble. I was young, immature, and doing stupid stuff all the time. I was in detention a lot, mostly for being out of uniform because I wore combat boots with my plaid uniform skirt and I always wore black socks instead of navy blue or my shirt was pulled out just a little too far so it could be considered untucked. I didn’t really mind detention because it was a place to get all of my homework done in peace and quiet. The one detention I am proud of was for throwing another girl up against the lockers. Now I know this is probably not something most people would be proud of, but to me, then, and now, it still is.

I threw that girl up against the lockers because she walked up to my friend after religion class where my friend had just asked us to pray for her cat who had been run over by a car and whispered in her ear “I ran over your cat”. To this day, I do not remember that bully’s name or why she would say something like this to my friend, but in that moment my reaction to someone hurting my friend was to throw her into the lockers. I served my detention for fighting in school. Sometimes people just need to be shaken and told that it’s not okay to say mean things to other people. 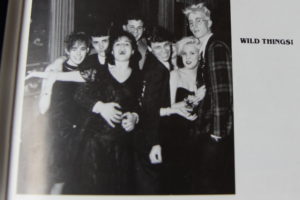 Years later I still have this kind of loyalty to my friends. Years later I am also still the one a lot of people look at twice because I wear Doc Martens with my jeans or my sleeveless band t-shirts to the gym. And most importantly, years later I still don’t care what other people think about me. I like me. If other people like me, that’s great, but if they don’t, I’m okay with that too. Just keep it to yourself. It’s really not my business if you like me or not. 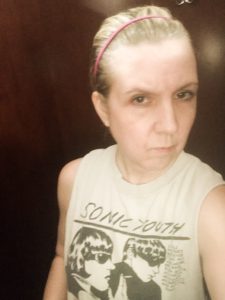 My dad has a scar on his forehead where he went through the windshield of his car when he crashed racing to be at his friend’s side after his father died. I loved hearing that story growing up, not because my dad was hurt but because he was going to be with his friend who needed him. That story taught me how being loyal to a friend in need is important. I was driving to the hospital to see a friend who needed me over the weekend when my phone rang and my friend who posted the facebook post asked if I knew who this woman was who commented. Apparently the bully and I went to high school together. It would be really funny if it was the same bully who picked on my friend years ago, but it wasn’t. It was just another mean girl who grew up to be a mean woman and bully people on the internet. In that moment I did the same thing I did as a teenager, but instead of throwing a girl into the lockers I commented back to her on facebook and asked her if she had Asperger’s Syndrome. If she does I can totally understand why she asked the question and she would have gotten a pass. That wasn’t very nice of me either, but sometimes people need to be shaken and told that it’s not okay to be mean on the internet and attack people publicly. My husband has commented that it’s possible that both my father and I have Asperger’s Syndrome because we don’t pick up on social cues and focus on what we are interested in very intensely. Personally, I think we are both just sarcastic assholes who are loyal to our friends. She never responded and she deleted her comment so mine went away with it. 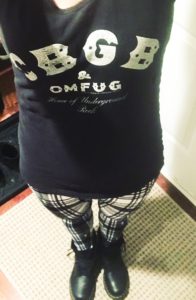 I would consider myself a kind person. I try to put myself in other people’s shoes before I open my mouth and I know that everybody has their own stuff that they are going through but that woman just really needed someone to put her in her place and I don’t mind being that person every now and then. Yes I was being childish too, but sometimes my emotions get the best of me. I had just been in a situation the day before where some people were passing judgement on me for dressing like an angsty teenager when they don’t know me as a person at all. I am still sometimes an angsty teenager and that is what makes me unique.

I thought my days of detention were over years ago, but alas they are not. My husband put me in detention after I told him this story. I guess sometimes when you act like a teenager so much you better accept being treated like one sometimes. Hey at least I got some writing done in my detention!