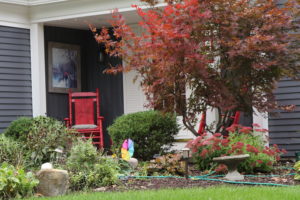 There is a house at the end of our street that is slowly decorating the outside with it’s insides. There are rocking chairs on the front porch and chairs with cushions on the back deck. Last year I noticed several new planter boxes and a bench in their front yard. A few months ago a painting appeared on their front porch. I am waiting for a couch to appear on their deck. I have to wonder what the inside of their house looks like if they have run out of wall space for paintings. The funniest part about this painting is that it is of an outdoor scene. So whoever hung it apparently thought that the actual flowers and trees in their yard were not nearly enough nature and a painting of nature was necessary to create the proper outdoor vibe.

I know a hoarder when I see one. I come from a family of hoarders. My grandparents had geese on their front porch that my grandma dressed in outfits according to the season. Have you ever seen a goose in a sweater? If so, you may have lived next door to my grandparents at some point. When my grandpa retired he spent a lot of time finding new projects to make. He made bird houses out of license plates and garden figures out of wood. As they made their way to my parents’ house I watched my dad turn them into garbage by accidentally running into them with the lawnmower or dropping them onto rocks. My dad’s fingers were never as buttery as when he was attempting to hang one of my grandpa’s new creations. It wasn’t that my dad didn’t like these decorations, there was just too much stuff in the yard already. 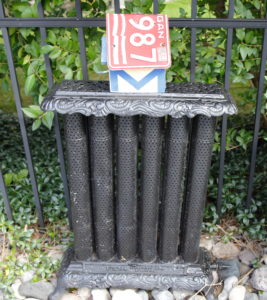 My mom decorated the backyard with some interesting pieces. For years an old fashioned sewing machine table stood next to the fence. It was surrounded by river rocks and bushes. The entire perimeter of their backyard consisted of bushes and plants, but in any open space my mom found, some form of a decoration appeared. There were fishing nets and sea shells, terracotta angels and birdhouses. I could understand the nautical decor since they had a pool, but what a sewing machine stand had to do with a relaxing backyard was beyond me. Maybe she had a lot of Quaker friends who would appreciate it, but I didn’t get the concept at all. This item was replaced by an old fashioned pipe radiator at some point which makes a little more sense to me because maybe people need to heat up a little after they get out of the pool. It would make even more sense if my parents’ pool wasn’t heated to a very comfortable bath water degree most of the season.

I think my husband sees the pattern and has that fear that all women eventually turn into their mothers because he secretly throws out things when I am not paying attention. He used to sneak things into the monthly bags of donations on the front porch before he left for work in the morning hoping I wouldn’t go retrieve them before I left the house a few hours later. This came to an end when I quit leaving the house in the morning. I don’t know how he smuggles the stuff out now, but I looked around our garage last week for an hour trying to find my flag that goes up during football season with no luck, so he’s getting it out of here somehow.

I can see where his fear comes from though. While decorating for fall I found that I had not one but four fall themed wreathes in the basement. We have one front door so I’m not sure what will become of the other three. I guess I could always walk them down the street and see if the neighbors need one. Maybe I will drop it off on my way out to buy a new Spartans flag.

I wrote this post while listening to the new Interrupters album