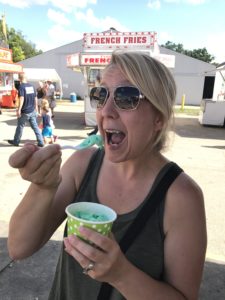 I have a serious sweet tooth. Anyone who knows me, knows I cannot pass up anything sprinkled, drizzled or dipped. I also am known for doing everything a little bigger than necessary. I earned the nickname “double scoop” when my entire family went out for ice cream and instead of getting one scoop the size of my head, like everyone else, I opted for two scoops and proceeded to consume both quicker than anyone else finished their single serving. I should probably be ashamed, but it takes more than one of the seven deadly sins to instill that feeling in me.

One of the areas where I have always been a little extra is gifting sweets to others. For several years I gave boxes of Godiva chocolate to everyone for Christmas from our cleaning lady to my family. I bought so many little gold boxes that Godiva started sending me a corporate catalog. When I finally moved on to another obsession for gifting, Godiva customer service began calling me about my “corporate” account. It took several phone calls for them to understand that I was not in fact a business purchasing for multiple locations, but a married mom from the Midwest with a serious sweet tooth. I told them I had developed diabetes and requested they close my account. I still buy quite a bit of chocolate, but now mostly from local shops.

Imagine my surprise when I opened the mail yesterday to find a check from Godiva. Apparently there was a class action lawsuit at some point and I was in said class. I have received a few checks over the years like this, normally in the range of a few bucks. Imagine my surprise to find a check for close to $50. My first thought was now I had a reason to buy the sixth pair of Vans that arrived along with the check in today’s mail. My second thought was how much chocolate had I had to have bought over the years to earn such a substantial piece of the class action suit. I wish I could say that this thought brought about a little embarrassment, but alas, it did not. Sometimes Double Scoop just has to have a few thousand boxes of truffles apparently.