Stay Together For the Kids 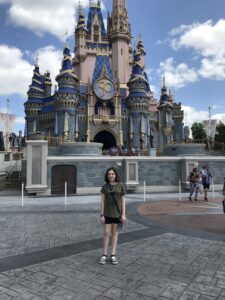 Theme parks really bring out the worst in people. Half the people are wandering around clueless and lost and the other half are running you over to get to the front of the line. For those of us in the middle of these two groups, it’s a bit of a war zone. We spent Easter week at Disney and most of that week we spent either dodging people staring at their phones while running through the park, or tripping over people as they stopped to figure out where they were. I was almost flattened by multiple scooters as Grandma let little Bobby try to steer his way through a crowd at 12 miles per hour while eating an ice cream cone. I love Disney, but that week was a little traumatizing.

One of the enduring themes throughout our stay was watching people attempt to get on rides that were full. We watched a group of teenage boys climb on to an overly full safari jeep and literally sit on each others laps while forcing small children over the rails on the other side. One older couple ended up completely surrounded by sweaty teen boys yelling at each other to scoot over and make room. If they had waited their turn, they would have ended up occupying the two rows ahead of us, so I was happy to see them go, but I wouldn’t be surprised if grandma never made it past the giraffe crossing. Another woman tried to climb onto a two seat roller coaster behind me and drag her daughter along. She just looked at me for a minute before realizing that she had to wait for the next train to arrive. I’m not sure how this happens since they have numbers in each ride queue and they always stack people two loads deep. My rule of thumb is if you don’t know the person in front of you, don’t follow them on a ride and try to sit on their lap. It leads to discomfort for all parties involved. 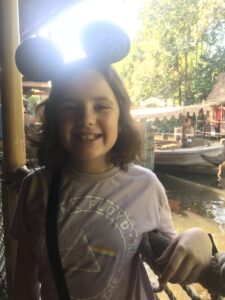 The rides with younger kids were the most problematic. We watched a little girl dressed as a princess with a birthday sash force her family to change seats on three separate rides. She was climbing over seats and attempting to get her 300 pound grandfather to do the same. One of the cast members finally told her to pick a seat and stay in it after she had a tantrum about not being close enough to the front. I had to laugh a few minutes later when she got soaked, unaware that the front of that ride was probably not the best seat in the house. Two little boys followed my daughter and me on the Seven Dwarfs Mine Train and tried to get on the ride with us in a two seat car. When they realized they didn’t fit, they tried to turn around and one got squished in the door. I watched as their parents stood on the other side completely oblivious that one of their kids almost just lost an arm. That was probably my favorite episode of Kids Gone Wild at Disney.

I think what prompts people to behave this way is they want to have the best experience they can and are impatient to have their experience. They don’t stop to think that cramming themselves into an overly full truck or climbing over other people to get to the best seat is not going to do it. I watched the birthday girl spend her time looking at all of the other kids to see if they were looking at her rather than enjoying the ride. They weren’t looking at her, and the ones who were (like my kid) were mostly commenting on what a brat she was. I heard three different dads get reprimanded by cast members for putting their kids in danger. While on the safari a man had to be told that the animals around us were real and dangerous as he held his baby in the air near the alligator pit. I’m sure he was making sure she had the best possible view since babies are really into alligators and all. Another man had to be told that his child needed to sit multiple times on the Jungle Cruise. It took an entire boat of people staring at him for him to finally comply.

We are fortunate that our kid is past the age of caring about the characters so we didn’t have to stop for any photo ops. I saw some of them, and it was similar to the fourth circle of hell. It doesn’t help that only about half of the characters are making appearances. We spent enough time waiting in line for our little foodie to taste frushi, seared scallops and avocado toast. Although we didn’t encounter many hangry little monsters in these lines, there were a couple bitchy bros with man buns. Disney really does provide entertainment for everyone, even if that entertainment is being a judgmental asshole. By the end of the vacation, my kid was already talking about visiting Universal instead next time. I see many more trips to theme parks in the future, with rides for bigger kids and trading in pushy princesses for sweaty teenagers. Somehow I know this is going to be a grass is greener situation the first time a stoned 15 year old barfs near my shoes.

**Since theme parks are a bit like a pit, I had to listen to some good old fashioned hardcore while writing this piece.