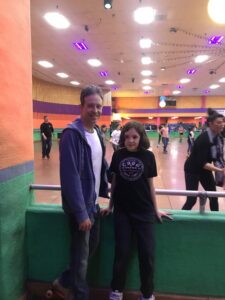 My child has taken up roller skating. This is an unexpected turn of events since she went to a roller skating party once in the second grade and hated every second of it. She had not tried it again until a few weeks ago when a friend asked her to go skating. Apparently she loved it because since then that’s all she has wanted to do. So much that we had to run all over town finding her a pair of skates so she would be ready next time.

Next time ended up being yesterday and it was with Mom and Dad. I hadn’t skated in at least 20 years, probably even longer, but I agreed to lace up and skate with her. After about three minutes I felt horrible about having sent her skating with her friend who had to endure hours of holding my kid’s hand while she tried to simultaneously hold the railing and make her way around the rink twice while barely moving her feet. This child was so afraid of falling that she barely let go of the hand rail. When we skated up behind someone standing at the rail or moving even slower than us (hard to imagine), she stopped behind them and waited. I finally started grabbing her hand and pulling her along with me. I tried a few times to pull her away from the rail and you would have thought I was trying to drown her watching her arms flail.

I have to say that walking into that place brought me right back to being a teenage girl. I’m not sure how they manage to stop time but there are a lot of 60 year old women looking for whatever magic lives between those four walls. Time has actually not progressed in almost 40 years at this rink. Even the carpet is exactly how I remembered it. All of a sudden I had the urge to smoke a cigarette and rat my hair. Walking past the bathroom on the way in brought me right back to the time a girl threw a slushie at me because her boyfriend asked me to couples skate on a Friday night. And lacing up the rental skates brought me right back to lacing up my speed skates, getting ready to win whatever crappy ribbon and free snack bar treat was waiting at the finish line. 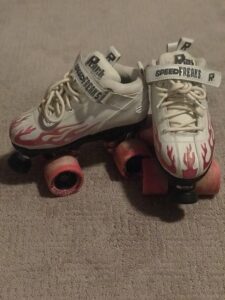 I would be lying if I said I wasn’t nervous to be on wheels again. It had been a long time and lets be honest, breaking a hip after a fall would not be all that unlikely for me. I have made it through 5 years without a stupidity-inflicted injury, but it’s only a matter of time before I trip, slip or fall. But apparently skating is a lot like riding a bike because once I was on the rink, it was like I had never taken off skates. Within a few minutes I was skating backwards and spinning in circles. I even got a little gutsy and sped around the rink a few times only wobbling a bit while trying to do a crossover on a turn.

I refrained from getting back on the rink when they called an adults only skate and opted to watch the crazy old black guy who kept waving and fist bumping people as he made his rounds. I am always up for embarrassing my kid, but not to the extent that she’ll never leave the house again. A bunch of boys from our neighborhood were there who would have tortured her relentlessly if I made an ass out of myself. Plus, if there was a time for me to fall and break a hip, it would have been in that moment. I try not to temp fate, especially with the kind of karma I have earned. I saw that old black guy’s wife as well, and she looked like she had thrown a slushie or two in her lifetime.

I have to say, I never thought I would be hanging out with my kid at the same place I used to flirt with boys and smoke cigarettes. But here we are, and I honestly couldn’t ask for much more. Well, maybe that my legs didn’t feel like I ran six marathons the next day.

*Spending the day in a time warp had me listening to some music from my youth – Violent Femmes.