US Out of My Uterus 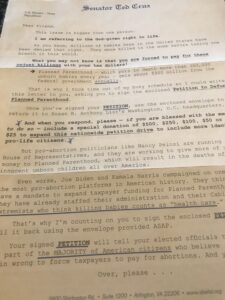 I get some weird junk mail and spam mail. A few years ago I received a handwritten letter by someone I had no recollection of that claimed to have been a classmate in high school. Since I also have a limited recollection of my high school days, I took her word for it and looked her up in the yearbook. That is when I discovered she was a no good filthy liar. She had picked the last name of a classmate of mine, but had a different first name. She also claimed to have attended grade school with me at a school I never stepped foot in. The best part about this letter is that she was writing to me about the Jehovah’s Witnesses. She was lying about who she was to recruit me into a cult. Clearly she did not know me at all or she would have known that not even a cult would take me in and put up with my nonsense. A few months later I received another handwritten letter from someone claiming to be a 12 year old boy telling me how he wanted to share his love of Jesus with me. I kind of miss the days when they would just knock on your door. At least that way I could have warned him that his cult would never allow him to see an action movie or listen to music and that he had a lifetime of missionary sex and doors being slammed in his face to look forward to. Maybe I could have recruited him out of Kingdom Hall if he had knocked on my door instead of trying to lure me in with his pathetic letter. Then again, the 12 year old boy was most likely a 70 year old granny, the same one who wrote me the first letter. Catfishing must be exhausting.

I have also received quite a few postcards for some far right republican politicians which I always find interesting. I am not opposed to receiving propaganda from either side of the aisle, I just wonder how I got on some of these lists. Political “information” is always pretty comical to me, but absolutely nothing has topped the latest letter I received from Ted Cruz asking me to donate money to his ridiculous foundation. Every other line of the letter reads like a billboard claiming our vice-president is pickpocketing me to pay people to murder babies. His letter was in fact begging me for money to support the defunding of Planned Parenthood. I could make a lot of statements here about how Ted Cruz probably never had to worry about something like an unwanted pregnancy since no woman in her right mind would let that little slime crawl on top of her, but I won’t. Instead, I am writing Mr. Cruz a thank you note which reads:

Dear Mr. Cruz,
Thank you for informing me about the goal of your organization to defund Planned Parenthood. This is something that I was unaware of and most definitely plan to do something about. I know that you were hoping to receive a check from me, but all I can offer to you is a photocopy of a check. Please find enclosed a photocopy of a check remitted to Planned Parenthood. I had an abundance of money at the close of the year and had been considering several worthy charities when I received your letter. I had completely forgotten about all the good work Planned Parenthood does until you so generously reminded me. Thank you. Merry Christmas and God Bless.

Now onto my letters to the Jehovah’s… I’m thinking as a gift a subscription to Hustler may be in order. I also just realized that these kind of shenanigans are exactly how I get on all of these lists.

**Something the Jehovah’s would never allow… a little Slayer!