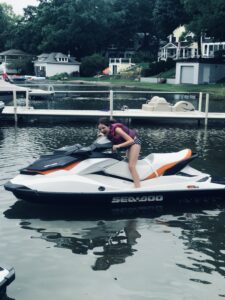 The other day we were talking about teaching my 10 year old to drive the wave runner by herself. She is tall and she always wants to drive, but having her sit in front of someone is difficult since you can’t see around her Amazonian body and Mowgli hair. In the middle of this conversation between me and my dad, my mom stopped us and said “you know it’s illegal for her to drive those alone right?” to which we both stared at her like she was speaking Greek. I quickly said “Only if she gets caught!” And this is where it is clear I am my father’s daughter, and my child is following right down those rebellious misguided footsteps. We all looked at my mom like she was crazy to say out loud that breaking the law was probably not a good idea.

My Dad gave me my first motorcycle ride before I was a year old. Apparently I caught a cold shortly thereafter and my grandma quickly put the blame on the bike so I wasn’t allowed back on until I was 3. I also got my first helmet that year. It was orange and loud and too big. I loved it, and I loved the motorcycle. So much in fact, that by the time I was seven I was demanding to ride alone. My dad made me show him that I could hold it upright unassisted and operate it alone before I was able to take my virgin solo ride. By the time I was ten I was a little terror in the trails down the street and ripping up the baseball field at the elementary school. I was also very clear on the rules which were “if you see a cop, turn off the bike and say you are out of gas and waiting for your dad to come back.” I was then to walk it home with the cops following me. I partook in this parade quite a few times before the police finally told my mom if it happened again they would see that I did not receive a license to drive at 16. I guess I shouldn’t have been all that concerned since I actually drove myself to driver’s education classes in my own car at the age of fifteen, but at the time it scared my mom enough to make my dad sell the bike. Although that was just the beginning of my tendency to push the limits, the lesson I learned was you don’t get in trouble unless you get caught. 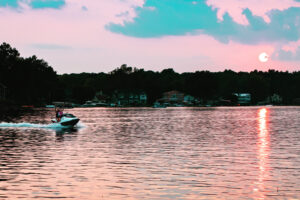 This lesson has trickled down to my daughter. Fortunately, she isn’t doing anything she feels the need to hide from me yet, and with my experience in jackassery, she will probably have a hard time doing so. Right now she is still wondering if she is allowed to do things on her own and when she is given a yes by mom or grandpa she follows up with dad or grandma to get the real story. I just keep telling her not to worry. She won’t get caught and if she does, mom will be in trouble which is a pretty familiar place for mom to be. Apparently my kid is totally okay with me paying the price for her misdeeds as well since as soon as I explained I would be in trouble for making her drive, she grabbed the keys and tried to take off on me. Luckily, the wave runner takes a few seconds to start or we may not have seen her again until she ran out of gas. Although, she drives like a grandma, so I probably could have caught up to her with a quick doggy paddle.

I have had a lot of great experiences in my life, party because I was not afraid of much. I have had some bad experiences for the same reason, but that is a whole different story. Little things like laws and rules have rarely deterred me from trying something new and have often times made me learn a new skill, like jumping off a roof with a skateboard or moving through spaces that are too narrow for a cop car to follow. I am hoping that my kid can learn some of these life lessons from my stories rather than having to touch the ot burner herself, but only time will tell. For now, I am grateful that she will take a chance now and then but drive slow enough for her mom to still catch her.