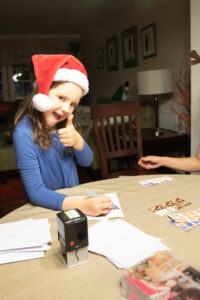 Every year I ask my daughter what she is going to ask Santa to bring her on Christmas morning. Every year I am confused by her requests. This started very early in life. The Christmas before her third birthday she asked for the Hulk. She had a major crush on the big green guy for a few months prior and wanted a 12″ plastic action figure which she then slept with and carried around for months. The following year, she asked for a Catman stuffed animal and Velma barbie doll. Both of these things took months to find and cost more money than the drum set that also arrived Christmas morning.

The nearly unattainable gift requests have continued almost every year. The problem seems to be that my kid, much like her mother, leans toward the unconventional. Last year she asked for a KISS onesie (which do not come in kids sizes), Hocus Pocus dolls (which do not exist) and a hand written note from Santa placed under her pillow (good thing she is a heavy sleeper and I can forge almost any handwriting). I’m not sure if she makes these requests to test Santa’s abilities or if she is just really high maintenance, but at this point I am almost looking forward to the day she no longer believes in the fat man.

I am guessing that day may be around the same age she gets her driver’s license. I believed in Santa for years after my peers gave up. In my defense, my dad was an elfing genius. We took off for midnight mass every Christmas Eve and when we returned home hours later, the tree was packed with gifts. I found out years later that he had some guys who helped with the gifting. I am still impressed that someone was able to get a giant gymnastics mat through the door and into the living room alone. 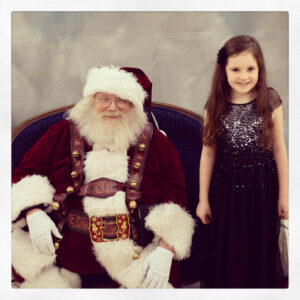 This year when I asked my daughter what she would be requesting for gifts she exclaimed “a grappling hook and a bullhorn!” without missing a beat. I have no idea what she plans to do with either of these items, but I wouldn’t be surprised if the grappling hook is to climb up to the roof and the bullhorn is to yell at me to bring her things while she is on the roof. Maybe I should get a second grappling hook for my inevitable rescue mission. Actually, I should probably get three so my husband can make the climb once both of his girls are stuck on the roof.

The most ridiculous part of the requests from Santa is that every single year she talks about something she wants for months and then decides she doesn’t really need it at the last minute, but really needs something else (like a KISS onesie). Every year I tell her Santa must be watching her when she receives the Harry Potter onesie she talked about all summer, so I guess it actually helps the cause. This year I was sure she wanted an enormous Harry Potter lego set. I was wrong and I don’t mind being wrong, but it would have been a lot easier to swallow four months ago when I had an additional $400 in my bank account. The good news is both bullhorns and grappling hooks are pretty cheap. But then she did what she does best and informed me that in addition to the two items she already mentioned that she was going to ask Santa for a gaming system and a dozen video games… at least it’s not a pony!

**I’m just elfing around listening to some punk rock Christmas music over here while I simultaneously shop for electronics I know nothing about and try to list a brand new lego set on eBay!!