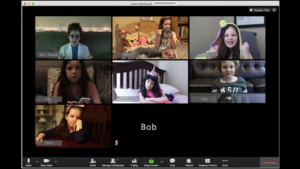 The best part about this pandemic has been watching people try to use technology when they have no idea what they are doing. Last spring, I laughed watching a bunch of third grade kids do things like wander into the bathroom while holding their tablets or walking off in the middle of a zoom meeting because they forgot what they were doing. That was understandable, and I have to say, all of the kids who have had to navigate using technology over the last six months are going to be better for it and more skilled teenagers. Adults are a whole different story.

I am in graduate school with a bunch of people who can’t figure out zoom. Sure, everyone quickly figured out how to turn their camera off so nobody could see they were lounging around with no pants on. Unfortunately, many of the same people could not locate the mute button. In one class, 25 students were muted and one was not. The one who was not muted had an entire conversation with her boyfriend about what to get her mom for her birthday and about how she somehow got makeup all over herself while the other 25 called her out in the chat area to shut up. There has been at least one incident like this per month. I even have a professor who kept using his personal account to open zoom calls so the entire class got kicked off after a half hour. It took him a full three sessions to figure it out and half that class still can’t log in to his new link.

But by far, the best people to observe on zoom calls are older retired people who are not adept at technology but think they are. I do a lot of volunteer work, so I am often surrounded by older people trying to be helpful. One of the organizations I volunteer for provides tutoring services for elementary aged kids. Since the pandemic, we have gone online. The kids are pretty skilled at zoom and the various platforms they are using for their schoolwork. The volunteers are great at tutoring, but are lost when it comes to technology. Luckily, a bunch of college kids were recruited this fall and have been able to help out. Unfortunately, many of the volunteers who are lost online have no idea they are lost online. I knew one woman in particular was going to be a problem when we had our tutor orientation and she was confused when people were explaining how to use some of the zoom features. When people told her to click on a dropdown menu she couldn’t find it. She didn’t even understand what we meant when we told her to click something. She finally said “I don’t have a mouse. I have a tablet!” to which most of us just threw our hands up. We were trying to show her how to get the drawing feature. I finally said “Put your finger on the screen and move it.” It was similar to teaching a caveman how to use tools if the tools were made of play-doh.

After the orientation, a second orientation was scheduled to get the half dozen elderlies comfortable using their devices. Apparently, even after the second session, this woman still didn’t get it. Tutoring has been going on for a month now and she still has no idea what she is doing and rarely even makes it into the breakout rooms when the host sends her there. She spent the first 15 minutes of the last session talking to her husband about how she couldn’t sign in to zoom. She didn’t realize she was signed in and we were all watching her as she peered at her screen barking “I don’t know where it went Stan. It’s normally right here! There is no picture.” She must have been continually touching the unmute button on her screen as she poked at it since the host continued to mute her every 30 seconds the entire time.

Virtual learning has certainly been an education for everyone. All I know is next time I am having a computer problem, I am calling my kid to help instead of my husband. And, I am thinking maybe this tutoring program I am part of should make the tutoring reciprocal. First the kids can help the old folks figure out how to use their computers and tablets and then we can teach them how to do math the correct way!

**One thing I know how to do with a computer is find music. I’m listening to some new material these days.