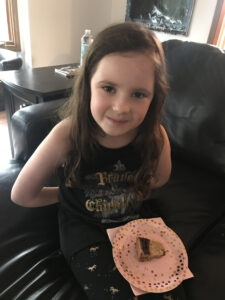 My child is spending way too much time with me. And I think it may be turning her into kind of an asshole. I heard her talking to her dad in the kitchen and she said “you’re killing me John!” I could picture her hands on her hips standing the same way I do when I tell him how he is literally causing my slow and painful death by loading the dishwasher wrong. I am kind of an asshole, so I spot one when I see one.

Every day she spends with me makes her a little mouthier and a little more judgmental. She is even starting to point out who doesn’t take care of their landscaping in our neighborhood and who is driving like an old woman on the road. She says things like “Don’t those people have like six kids? Can’t one of them cut the grass?” and “Oh man, that guy must be going to the doctor. He’s too old to be out driving.” I have been remarkably quiet in the car with her voicing my inner dialog.

Most of the time I find her sass amusing, but when she turns on me, it’s like being in a battle with a clone of myself. She’s  full of sarcasm and she knows all of my buttons. When she wants to get under my skin, she knows the quickest way to burrow right in. When I complain that I should be getting a chore done, she shames me with a “yeah, ya should!” or when I tell her she needs to do something around the house she retorts “maybe YOU should do that!” Watching her little smirk makes it even more like arguing in the mirror with myself. The child is a master at having the last word too, even if it is as her bedroom door is being closed on her or it’s muttered under her breath. I’m beginning to understand why she and I both talk in our sleep. We are both trying to have the last word.

All I know is when they say you will get exactly what you deserve in a child, they’re right. They’re assholes, but they’re right. My only comfort is that girls are afraid of turning into their mothers as they age and my poor little girl is already just like me before she has even reached double digits. She is getting her paybacks as she goes. It’s like instant karma. I, on the other hand, have reached middle age and am still not much like my mom. The similarities between me and the old man are a little frightening, but that’s a conversation for my therapist. My karma has come in an entirely different form, but it’s just as fitting.

**Music for today… Mother’s Milk would have been more appropriate but, but Catholic School Girls Rule was on my mind.