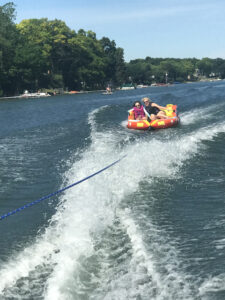 While boating the other day, I told my dad we were trying to kill him. An hour later my husband and dad almost killed me. Karma sometimes acts pretty quickly. Seriously karma, I was just kidding! Not that my husband trying to kill me is anything new. In fact, I’m pretty sure he has been working on a plan since the day we were married based on the amount of “accidents” I have had in the last 16 years. I am going to ignore the fact that I am accident prone here.

Let me start by saying that my kid and I are daredevils. When it comes to dangerous activities, we are all in. So needless to say, when we go rafting, we are the ones screaming “faster” as we bounce along the water. Saturday was no exception. My dad spent the better part of his afternoon pulling me and mini me around the lake on a raft. My mom spent the better part of her afternoon having a panic attack and covering her eyes. At one point we were almost completely sideways on the raft. I looked down and I was literally on top of my kid as we bounced over a wave. On the same trip around the lake my dad nearly plowed us into a family of ducks as he turned and we flew out to the side of the boat. Luckily it was not a family of swans or they would have popped our raft and pecked our faces off.

After an hour of my mom glaring at my dad he took her to shore. The thrill seekers were still up for more rafting so we took one of the wave runners out dragging the little two person bouncer behind. Everyone took a turn riding and driving. I didn’t drive since I drive one speed no matter if I am alone or dragging bodies behind me. I have been told that 55 is too fast for rafting. But I learned that you can injure yourself at any speed. My husband was going only 9 mph when he almost killed me. After the old man and mini me took a trip around the water she decided she wanted me back there with her so my dad took over the spotter duty while my husband drove. We were just getting ready to head back in when the men decided it would be fun to whip us around in a circle so my husband proceeded to spin around at single digit speeds while we circled. We had gone around twice when all of a sudden we were air born. A wave came out of nowhere and we hit it like a ski jump.

Both passengers were able to hold on with one hand, but we came down fast and hard. I landed on my side and was immediately pummeled in my ribs. I was clinging to the raft wondering who threw a bowling ball at me when I heard crying from above. My daughter was sitting on my rib cage right under my armpit holding her mouth and crying. She had apparently bitten her tongue. I eased her off me and tried to see inside her mouth while not moving. I felt like a baby holding it’s breath right before an enormous scream comes out, but no scream came, just small gasps. When we finally got back to shore, I slid off the raft and walked onto the beach still gasping for breath. I have had the wind knocked out of me on many occasions so I knew it would take a minute or two to catch my breath, but when five minutes went by and I still couldn’t suck in any substantial amount of air I was getting a little nervous. It didn’t help that three people were in my face asking if I was okay. I couldn’t get enough air to talk which was the scariest part. Not being able to talk for 10 seconds is torture for me. I would rather be water boarded than not be able to spew every thought in my head for five minutes. Since I couldn’t argue, being unable to speak and all, I was at the mercy of my family when they insisted that I go to urgent care to get an X-ray.

Luckily, I managed to worm my way out of actually seeing a doctor. One urgent care was closed and the other one didn’t have an X-ray machine (seriously!) so we headed home where I splayed my body on the couch with a bell while my family waited on me. I argued that even if I had fractured ribs there was nothing they could do anyway. I guess my husband figured if I was well enough to argue with him, I was well enough to carry on. I’m guessing I’ll discover some abnormality six months from now while getting a massage, which is the same way I found out I had a rib in my back that managed to flip over the wrong way and stick out under my arm. Until then, as long as I can get enough breath to keep ordering my family around, all is well.

**I wrote this while listening to the Beastie Boys takeover of XMU which is the best station to have on while driving around to urgent care centers!