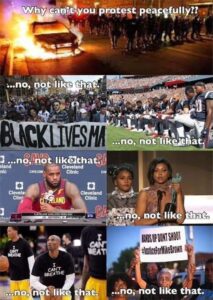 Some days I feel like I am living in an alternate universe. I have often said that the last few years have felt like a Marvel Comic movie where an evil villain has taken over and some dude wearing tights will show up at any minute and save the day. And I just keep hoping it’s Henry Rollins, but maybe without the tights. But the last week has left me flummoxed. So flummoxed in fact that I am using old-timey words like flummoxed. I’m not shocked and horrified by people protesting and causing chaos, I’m shocked that everyone is not joining them. I am shocked and horrified that the same people who are so vocal about the rioting and looting happening around the protests are the same people who didn’t have a word to say about any of the black men and women who have been killed by police in our country. But I shouldn’t be shocked. These are the same people the system takes care of. These people are me, just less mouthy and more comfortable with the status quo.

People aren’t out protesting because they have nothing better to do. People are protesting because they have had enough and they want their voices to be heard. And now they are being told that their voices are too loud. They are being told they are free to be angry, just in a way that is more pleasing to white middle class America, and that is bullshit. This is an abused child throwing a tantrum because that is the only way he is heard. This is the consequence of a broken system and the masses that were kept comfortable by that system don’t want to be disrupted. Apparently when a tantrum is thrown in the form of a white man marching up to the state capitol with a gun to protest a stay at home order, it’s okay, but when it’s the disenfranchised demanding justice it’s a threat. A bunch of entitled brats can protest not being able to get a haircut, but God forbid anybody hold up a Black Lives Matter sign and march down the street. Let’s just keep ignoring injustice and hope it goes away (or not).

It’s sad to me that things haven’t changed much in terms of racism in our country. I think if anything the racists have crawled out of their holes more in the past several years since they have felt protected by our current administration. And when they first started coming out I thought it might be a good thing because it’s easier to fight a known evil than one in disguise. But now I see that it’s kind of like turning on a light in a cockroach infested apartment. You just want to turn the lights back off and close the door. The problem with that is the cockroaches are still there. And what that light is shining on more and more is the systematic discrimination that our country has perpetuated throughout history. We feed the prison system young black men like Hitler feeding Jews to the gas chambers. It feels like trying to stop the gears of a machine by shoving a toothpick in between it’s teeth. But I am reminded that if all of the toothpicks are lodged into the machine, it will jam and break. So today I am a toothpick, along with all of the other toothpicks, trying to jam the gears of this broken system.

I don’t want to preach, but I will. Silence is complicity. If you want to see change, use your voice.