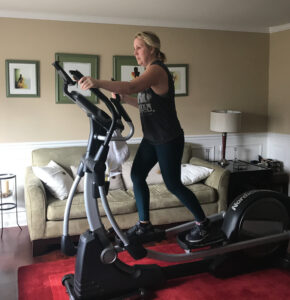 The past month has been strange to say the least. My child is home all the time, my husband is home but working long hours, we can’t go to church, the library, my beloved Target or out to dinner. But the change that is most disruptive to me is that I can no longer go to the gym. This was such a concern to me that before I even thought about getting my daughter set up in her new remote learning space I was online ordering an elliptical to be delivered as quickly as possible. I was fully aware that not everyone in my house would make it through this crisis if I was not able to sweat it out for an hour a day. While everyone was out raiding their local grocery store for toilet paper, I was online comparing elliptical specs. I don’t know why I bothered since I picked the one that most resembled my favorite machine at the gym. When shipping options appeared I opted for the white glove set up after remembering our last experience with purchasing gym equipment. My husband and I nearly killed each other trying to get a treadmill down a flight of steps into our basement twelve years ago. Clearly that experience scarred me for life as it was the first memory that popped into my head when I was ordering.

When I clicked “submit order” I was a little surprised to see that it would take two weeks to deliver. I set up a delivery time for a saturday afternoon and headed outside for a walk. Over the next few weeks I discovered all kinds of new places to walk around my house. There is a nature center less than a mile away where I spent hours at a time walking and watching wild turkeys and deer while I made observations about my fellow hikers. The one thing I didn’t do was sweat. I was getting desperate to get back to my routine when I received a call from the delivery company informing me that my equipment would arrive the following day between noon and 2 pm. That night I was like a kid on Christmas Eve. I actually dreamed about riding my shiny new elliptical. I had cleared out the space in my office where my new machine would be placed and I even vacuumed the floor. I was going to sleep in my workout clothes just to be prepared, but I thought that may be a little much. 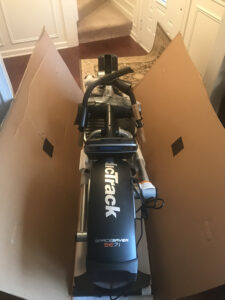 The following morning I was awoken by a truck rumbling outside my window. I knew it couldn’t be my delivery since it was not due for several more hours, but then my doorbell rang an there was an immediate pounding on the front door. I shook my husband awake and told him to run downstairs since I was in my underwear and my hair resembled something from a bad new wave video from the 80s. Within that ten seconds my phone started to ring. These delivery men were anxious to get in our house. Maybe they had heard about the mass amounts of hand sanitizer I had lined up on the counter.

When my husband answered the door he was informed that they were not all that anxious to get in our house, they were actually not even allowed to enter our house. They rang our bell at the crack of dawn to tell us we would have to reschedule or they could leave the box at our door. As I heard this from the top of the stairs I yelled down “LEAVE IT!!” knowing I would not survive another few days without a good workout, let alone another few months. They shoved the enormous box through our front door crashing right into the closet, knocking the door off the track. They said that was their “white glove service” and scampered away. My husband later informed me that we were supposed to have received a call about the delivery change which we still have not received a month later. As a matter of fact, the $250 charge for the white glove service has also not been refunded. Apparently Nordictrack charges a fee to send a couple of guys out to break your closet doors, just in case anyone needs this service. Maybe this is a ploy to get people to buy additional equipment. I can attest that after several calls, e-mails and online chats with no resolution, I need a good workout to burn off the anger secreting from my pores.

Delivery day turned out to be a lot less like Christmas day than I had anticipated. It was more like Tuesday at a work camp. After my husband and I stood staring at the box for an eternity, we finally got to work. It took a good 30 minutes to get the giant box on it’s side and cut open, and that was just the beginning. We decided that if two delivery men could lug this monstrosity up the stairs, so could we. This was the same magical thinking that had us believing we could set up a treadmill unassisted twelve years ago. We spent a much longer time than we should have walking around the machine trying to determine the best way to approach the lifting. Then we proceeded to circle the machine several more times trying to lift it periodically, both of us convinced that we could lift the side that our spouse was clearly too weak to lift. Neither of us could lift one side alone and we didn’t want to scratch up the hardwood floor trying to drag it. We were able to come up with several solutions to our problem, all of which included having other people move this beast which was not going to happen for awhile. 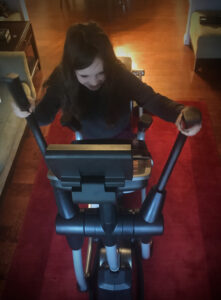 We finally conceded and dragged the machine into the living room using rugs. We were only able to move it an inch at a time and about halfway through I laughed that we had ever thought we could carry this thing up the stairs by ourselves. I did finally get to sweat the way I had been craving and was getting a full body workout just trying to situate the machine in the least obtrusive place. There is no such place with a piece of gym equipment in a living room. Gym equipment is obtrusive, especially in a living room. While we used the tiny tools to attach the arms to the machine I thought back to going to a relative’s house for a party where they had an entire gym in their living room. It was the first thing you saw when you walked in the front door and I was perplexed about why they would do such a thing. Now I know that they probably moved into the house and gave up on trying to move the equipment once they got ten feet through the door. Luckily nobody would be coming to our house to see our new home gym/living room.

The good news about this is that our living room faces the street so I still get the people watching I got at the gym, just with more dogs and kids. I get to read my book while I peddle away as well as watch the neighbors walk their dogs and weed their gardens. My kid has also decided that riding the elliptical is a blast so she hops on for a half hour at a time when she can’t get outside. My husband hasn’t used the machine much. I can’t determine if it’s a matter of not having the time or if he is holding a grudge from when one of the arms swung down and beamed him on the top of the head during assembly. Either way, he isn’t complaining about it being an eyesore in the middle of the living room. I’m just happy that I am able to get in a good workout in my own house. Lord knows I need it after the pandemic pantry bingeing that’s been happening around here.

*I wrote most of this in my head while on my new elliptical, but here’s some good workout music in case you decide to open a home gym in your living room…