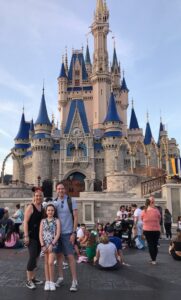 My daughter has spent the last six months mentioning how we haven’t been to Disney World in “forever” which is the equivalent of three years. Every time she said this I mentioned that if she remembered going a few years ago that it clearly hasn’t been that long. But apparently I am highly susceptible to brainwashing because about two months ago I started feeling like we hadn’t been to Disney World in forever. I always knew I would make a great cult member. So I booked a trip for her birthday which just happened to fall on a Monday after a long weekend for parent-teacher conferences. It was like the universe was screaming at us to take this vacation, so we did.

We were getting ready to head out and people kept asking if I was worried about flying. I wasn’t worried. Not even a little. I am one of those people that doesn’t really worry about much. My husband on the other hand worries about everything, so between the two of us, we have a pretty healthy outlook, but it only works when we are thinking in sync. I also carry buckets of hand sanitizer and sprays when I travel. I may not worry, but I am disgusted by other people’s bodily fluids, skin and breath. I was trying to get my hands on a hazmat suit to wear on the plane. Not to protect me from germs, just because I thought it would be hilarious to board a plane dressed like an extra in Contagion. My husband had been texting me photos of the lunatics in China walking around with plastic bags over their heads or helmets made out of water bottles. I’m sure these are the same geniuses who don’t wash their hands before leaving the bathroom, and every one of them would be seated around us on a plane. I didn’t see any bubble helmets but I did see quite a few paper masks. One of those masks would have been helpful during the flight when the couple in front of us sat down. I’m fairly certain the man rolled around in dog shit before boarding and the woman had tried to set herself on fire. It’s bad enough when you have to spend several hours in a giant metal fart box hurdling through the air, but when your fellow passengers are not vacationers, but residents of the land of meth and hennessey returning to their swampland, it’s especially ripe. 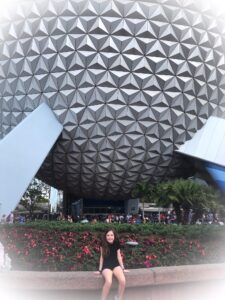 We planned this trip prior to any worldwide health concerns. We are assholes, but not the kind who put other people in danger. Social distancing is actually something I can excel at. I don’t particularly like people, and I certainly don’t like having to spend too much time with others, so I have been social distancing for most of my life already. Unfortunately this is not something that can be accomplished in a theme park. The night we arrived was the night they made the announcement that the parks would be closing in three days. Since the point of no return was miles behind us, we pushed forward. We loaded up on hand sanitizer and sunscreen and headed to the parks for the three days they remained open. Not so surprisingly, the parks were still packed with overweight sweaty dads licking their fingers after consuming a half dozen churros and tiny booger machines wiping their filthy hands on every surface possible. The only difference was the moms occasionally squirted a dollop of cleaning product into everyone’s hands after screaming “stop touching things!” The whole place smelled of alcohol by the second day, which was nothing new for Epcot. 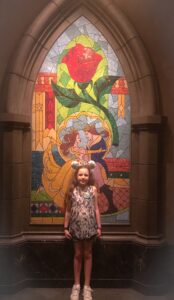 My daughter’s birthday was the day after they closed the parks. We had purchased after-hours park tickets and had reservations for the restaurant that you have to sell a kidney to get into, so needless to say, she was a little bummed out. Luckily I was able to move up our dinner reservation and my little princess was satisfied with being able to celebrate her birthday for several days instead of just one. We also realized after almost murdering each other after the first ten hours of stampeding from one ride to the next, that we would never have survived a late night together. It was probably for the best that our time at the parks was cut short by a day. We even made it over to the shopping district and to the pool, which never would have happened under normal circumstances. I even discovered a massage chair in the arcade that simultaneously squeezed your calves and skull in a death grip while punching you in the butthole. I’m not sure who designed this chair, but it may be the same guy who came up with waterboarding for the military. And I actually paid money to sit in this chair and then convinced my husband to do it as well. Apparently he could be a cult member too. 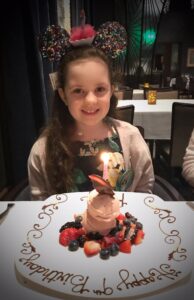 Shockingly, there were quite a few parents who either had no idea that we were at the beginning of a pandemic, or just didn’t care. I watched as children of all ages rubbed their hands all over every surface within a ten foot radius. They touched literally everything they could get their grubby little paws on while their parents stared at their phones. These parents obviously were not checking out CNN or they may have told their kids to keep their mitts to themselves. My husband watched one child pick his nose and eat it for a solid half hour. His mother was either immune to this behavior or just happy she didn’t have to worry about his lunch because she seemed not to notice that this kid was two knuckles deep trying to scratch his brain with his tiny fingernails that had just been submerged in a buckets of the seven dwarves fake plastic jewels. On the second day I offered my daughter $10 for every hour she managed to not touch anything. I explained that she could earn a cool $120 over the course of the day simply by keeping her hands germ free. She made $10 the entire day. She lasted the first hour and then never made it past 15 minutes after that. I must have poured two gallons of candy scented sanitizer on her hands that day.

By the time we checked out of our hotel and got ourselves to the airport they had announced that pretty much everything was closing down. All of the filthy little monsters licking their hands and then swinging on the railings were following their unaware parents to the beach. We watched the footage of swarms of bikini clad idiots storming the shores mistaking the word “pandemic” for “epic party”. All I could think is at least we are thinning the herd. If we had stayed any longer, we may have had to take out a loan to cover the tips I was handing out. I was throwing money around like a rapper in a strip club, knowing most of the workers were going to be sent home shortly. I was anxious to get home by this point as I knew we would need to quarantine ourselves for at least two weeks after having been exposed to so many people.

Once we got on the plane we were subjected to instructions on how to properly cough into our elbows and how to wash our hands in the bathroom. I was shocked that anyone would actually use the airplane bathroom, considering I will hold it for hours in normal circumstances before stepping foot in that petri dish. I guess I should have been more shocked that adults needed instructions on how to avoid spreading germs. The woman seated behind me proceeded to sneeze on the back of my seat for the next two hours and lean her head against the little airplane window. I don’t know if I have ever been so happy to get off a plane. Our vacations are always an adventure, but being home has never felt so good. Bring on the social distancing, it’s not often I actually get to show off my skills, and I could win a gold medal in this competition.

*I wrote this while trying not to kill my family and listening to X-Ray Spex!