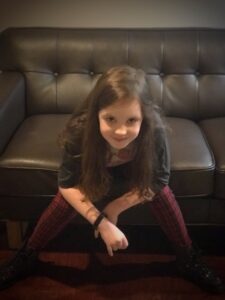 My daughter had her first wellness checkup in two years last week. We had switched pediatricians a few years ago after I got fed up with the snarky receptionist at the office we had been going to for the first seven years of my daughter’s life. We made it to her seven year wellness visit at the new office and haven’t gone back since. I’m not anti-doctor, but I view them the same way I view the police, only contact them when necessary. Since my kiddo has remained relatively healthy over the past few years, we really had no reason to visit our new doctor.

I was feeling pretty proud of myself for getting my daughter to her nine year visit an entire month before her ninth birthday. This would have been impossible if she had gone to her eight year visit, especially since insurance will only cover one visit in a twelve month period so we keep getting one more month behind. At some point I’m pretty sure our health insurance company will require that the doctor be seen at the hour of your birth annually to be covered. We pay a small fortune for coverage and they cover virtually nothing. My health insurance company has single-handedly made me defend socialism on more than one occasion. I am fairly certain I could break a bone per month and still not break even.

To the new pediatrician’s credit, she didn’t even mention that we skipped over a year of office visits. Instead, she asked my daughter a whole slew of questions about her lifestyle. Not surprisingly, my daughter revealed that she listens to a lot of punk rock music in the car and hears all kinds of swearing and that her mom lets her do unlimited dangerous things. When asked if she enjoyed her hip-hop dance class she actually went into a 10 minute dissertation about how the other girls wanted to hear terrible music like “dance monkey” (whatever the hell that is) and she would prefer to hear some heavier music for warm-up. My child is an almost nine year old music snob. Part of me was incredibly proud while part of me was horrified knowing I would be on the receiving end of this filibuster in the not too distant future. She talked about her friends and how she really likes the new girl because “she lets her freak flag fly” and explained a game they play at recess in great detail. Her doctor listened to every word and took notes. I can only imagine what she was writing but “call Social Services” or “send referral for therapist” were probably just a few of the pieces of chicken scratch. My kid had this entire conversation while sitting casually on a leather couch. I watched as she became more comfortable and her feet spread further apart. At one point she had her elbows on her knees, leaning completely in to the conversation. It was like watching a mini Hunter S. Thompson talking about politics, simultaneously relaxed and intense.

The pediatrician ended the visit by asking my daughter if she had any questions. I’m surprised my inquisitive and thorough child didn’t ask to make another appointment just to gather her list. Instead she asked a series of questions all about the doctor’s family. Within 5 minutes my daughter learned more about her pediatrician than I know about most of my friends. Before leaving my daughter requested that on her next visit she be placed in the Harry Potter themed room. She actually asked if we could move the exam into that room about halfway through the appointment and was told that she could be there next time, so apparently it was a high priority. In the car on the ride home my daughter said “that was fun. Why don’t we do that more often?” I think I am going to have her call the insurance company to have this conversation. If I can’t get my money’s worth out of them through services, I can certainly get it through time and entertainment.

*I wrote this blog while listening to The Misfits. It has been a nice change of pace since the wee one has been blaring the Zombies 2 soundtrack for the last three weeks…