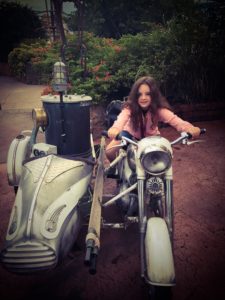 Family vacations are always a mix of pure joy and total exhaustion. Children don’t acclimate to new settings as quickly as adults so their reactions to pretty much everything are usually a little over the top. They are like little ping pong balls bouncing back and forth between bliss and terror. My mini-me is usually on the verge of wetting her pants with excitement or trying to find a safe place because the sky is falling. Also, once she is excited, there is very little slowing her down. She is like a tiny energizer bunny. Unfortunately, her recovery time from a walk into terror town is of similar length.

We took a trip down to Florida last month to test out the latest Harry Potter ride at Universal. This was not exactly the trip we were planning to take at the end of June, or really at all, but it happened. We had gone to Universal during Easter break and somehow when I planned the trip back in March, I bought two sets of tickets to the theme parks. This sounds ridiculous unless you know me. I buy duplicates of things all the time. In fact, I realized on this trip that I had packed a pair of shorts with a tag still on them that I had worn several times since May. I had not actually been wearing the pair with the tag on them, I had been sporting this pair’s doppelganger for a month prior to buying the shorts I took on vacation. I usually pretend that I intentionally bought duplicates because of my undying affection for whatever the item is, but this tactic was not a good one in the case of the duplicate tickets. I had to fess up that I accidentally bought two sets of tickets whilst confused about how many days and how many parks we planned on visiting. Needless to say, my husband was not thrilled about this trip but mini-me was over the moon, especially since a new ride had opened just two weeks before our arrival. 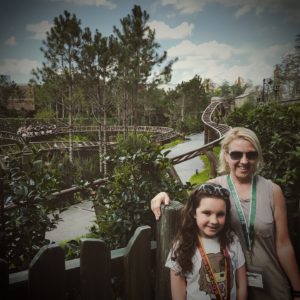 During our flight down to Orlando, my daughter talked of nothing other than the timing of our riding the new ride, where she most wanted to sit and how many times we should fly through the air strapped onto a metal track during our stay. She vacillated between titillation and crippling fear for the three hour trek. She loves all things Harry Potter but is nervous about roller coasters, so there was much ambivalence. She had watched several YouTube videos of the ride which were apparently replaying on the screen in her brain repeatedly.

Once we arrived, we could hardly hold her back while we checked into the hotel and grabbed lunch. As we headed toward the park (by foot since it was faster than the water taxi), she skipped ahead of us calling back for us to hurry up. When I finally barked at her to slow down and settle down she turned to me and said very earnestly “I know, having kids is hard. Maybe you two shouldn’t have gotten married.” Just like that – mom, these are the consequence of your actions, live with them. She stroked my arm while saying this, the same way I have touched her while doling out a punishment for the last several years. I couldn’t help but laugh. Proud of herself, she skipped off ahead of us again. 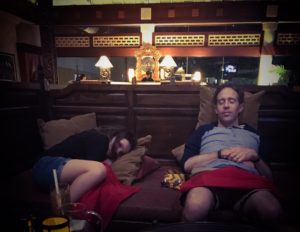 My husband and I spent the rest of the vacation blaming every minor disappointment on our marriage. Everything from long lines to the rain that arrived halfway through our third day was the result of our nuptials. Apparently the butterfly effect of all things can be traced back to our wedding fifteen years ago, even the decision for overweight women to wear short shorts. Who knew?! Luckily, the same rules applied to all things that went right. Riding the front car of the new roller coaster wasn’t luck, it was the direct result of my saying “I do” in 2004. If not for our marriage, the ride probably wouldn’t even exist. If nothing else, the recurring joke saved us our sanity while fighting crowds in the sweltering heat.

By the final night of our trip, my family was literally falling asleep at dinner. The fact that the seating at the restaurant was groups of couches did not help. We fought the sleepiness long enough to inhale some sushi before collapsing into our beds. My child’s sudden narcolepsy was of course blamed on her parents’ marriage. I had to point out that this was probably the most accurate assessment of the entire trip. This crew really does wear me out!