My daughter had her first communion last week. But first, she had to complete her first reconciliation. She had been talking about this event all year and, of course, I had a few questions for her about the process. Namely, when she needed to confess and what atrocities she had to confess.

I recall going to confession as a child and debating about what to tell the priest and what to keep to myself. It wasn’t necessarily that I was such a bad kid at the age of eight that I thought my sins were unforgivable, I just didn’t want to admit I was wrong about anything. Telling the school priest that I had been mean to my mom or lied to a friend seemed like a not so smart thing to do. I was always a skeptical child, so I was pretty sure the priest was going to blab all of my dirt to my teachers. I pictured them sitting around the lunch table gossiping about what the kids said to their moms and each other. I didn’t want anyone to have any dirt they could hold over my head.

A month ago when my mini-me and I were talking about confession she asked what kind of things I had talked to the priest about when I was her age. I told her it was mostly me being sassy with my mom or not being as nice as I could be to friends. “What do you do if you don’t have anything to confess?”  she asked with a straight face. I told her I could give her a list if she needed one. She sounded just like my Dad who jokes that he has nothing to repent for. Unfortunately, she wasn’t joking. In her mind it was a totally valid question. 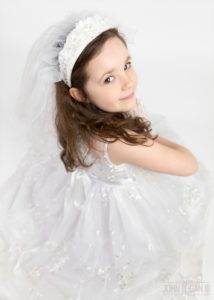 The day before her first communion was spent preparing for the big day. The kids practiced the readings, found their places in the chapel where they would sit with their families and tasted the wine. I had learned earlier that they give all of the kids a sip of the wine the day before so nobody spits it out on their dress at the main event. My daughter had a rather lengthy discussion with a saleswoman at the shoe store about this as we picked out a pair of white heels. She talked animatedly about how disrespectful it would be to God to have some kid spit out the blood of his son all over the floor. She had already talked to me repeatedly about the church wine. She was scared to drink it because she thought it would taste bad. I wouldn’t go so far as to say she was obsessed, but the wine was on her mind much more than her weekly spelling words or current lego project. I was happy to know it would be put to bed after her retreat.

When she came home from school that day she had two things to share. The first was that she did make a confession and it was that she made me crazy in the morning (which is true). She was not given penance with the rosary, but was instead told to cut it out. She of course shared this information with her grandparents, but did not want to divulge the conversation to me. Smart kid. The second piece of information she shared with her dad (again, not with me). She walked in and promptly told him “Dad, I loved the wine. It tasted so good!” He immediately texted me to let me know that fear was coursing through his veins. Well, that seems about right – my kid worried about the wine for a month and we will now worry about it for the next twenty or more years.