A friend of mine recently told a story about being the only mom participating in an activity while other moms sat back watching. She was on vacation, in the ocean taking a surf lesson with her husband and kids. Other moms sat on the beach taking photos and watching while their families had an adventure. The women  documented the event as their families experienced it.

Her daughter noticed the anomaly and pointed it out. The tween asked why her mom was not doing what the other moms were doing (or not doing). In this story, the mom explained that she was in the water because she had recently gotten into better shape and was finally comfortable in the wet suit, whereas six months prior she would have probably made an excuse to sit on the beach instead of getting in the water. She shared with her daughter that she was happy to be in a mindset where she would rather be participating in the adventure.

I wondered how many other moms were sitting on the sidelines for the same reason and how many were watching from a distance simply because “that’s what the moms do.” Most of my adventures as a kid were led by my dad. Sometimes my mom participated, and sometimes not. Her participation seemed to depend on the level of danger involved. I think she shied away from some of our adventures after she mistakenly engaged the clutch instead of the brake on my dad’s motorcycle and almost ran me over. For the short period of time I played sports as a child, the dads coached and the moms watched. It seemed like anything physical was a “dad” activity and mom was left with arts and crafts or trips to the mall.

I have never been one to follow the crowd. I don’t sit on the sidelines and watch because “that’s what the moms do” and I have never bought the idea that different activities are better suited for boys than girls. I grew up on a motorcycle and skateboard. I am the mom who doesn’t mind getting dirty and certainly doesn’t mind making an ass out of herself. If it’s fun, I will do it. I am often a mom among dads and that’s just fine. There should be more of us if you ask me. 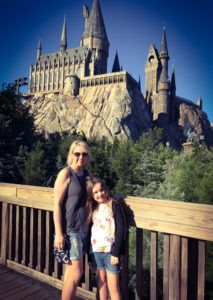 This story was on my mind when my family headed off to Florida for vacation a few weeks ago. Lo and behold, I saw moms all over the theme parks sitting and watching as their families rode the rides. It was most noticeable at the water park. Maybe the moms didn’t want to get their hair wet, or maybe they were uncomfortable climbing up the stairs in their bathing suits. Maybe they just wanted to relax and get a tan. I have no idea why these moms were watching instead of participating. All I know is I am not one of those moms.

We spent less than a week in Florida and I felt like I needed a vacation to recover when we got home. We were busy while we were there and I was often the one running up first to the rides. I have a handful of photos from vacation, but not nearly as many as I would like. But I will trade the documents of the memories for experiencing the memories any day!