Have people developed an aversion to headphones recently? I have been noticing more and more people watching streaming content on their phones and tablets at the gym without using headphones. They have the volume cranked up like they are lounging on their couch in their underwear, completely unconcerned about whether or not their noise is bothering anyone else.

Several years ago when my husband and I were in Atlantis, we were walking through the aquarium when an even trashier version of the cast of Jersey Shore came strolling through the halls. They were blasting music from a boom box hoisted on one of the spiky haired guido’s shoulders. I was disgusted – both by their greasiness and their manners. I mean, who does that? It was like walking down a New York City street in the 80s. Now, every time I hear someone’s music or movie emanating from their device, all I can see are the greaseballs slinking through the aquarium. Somehow seemingly normal, albeit rude, middle aged women morph into overly tanned, overly painted meatballs the second those speakers chirp. 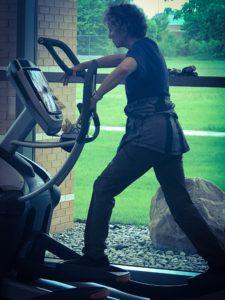 There are a few women in my gym who watch television on their devices while pumping away on the elliptical machines. One woman watches what I can only surmise is a tween fantasy show on her tiny iPhone. Every time a new scene starts, twinkly music bursts out of the speaker. It’s like Tinkerbell is flying out of her phone every 5 minutes. She is an Asian woman and every time her little bells start chiming I want to tell her that she is not helping to disprove any of the stereotypes regarding Asian women and their love of all things little girl-like. At least I can’t hear any of the actual dialog from whatever she is watching, just lots of giggling and bells.

A new woman walked into my gym the other day and proceeded to set up her over sized tablet in front of her. She spent the next hour blaring a cop show while everyone within twenty yards of her cleared out of the gym. It took every ounce of self-discipline I have – which is not much – to not sidle up next to her and crank up some Hatebreed on my iPod. Luckily I was reading a book by the Dalai Lama so I was extra zen.

I don’t know if it is our increasing selfishness, sense of entitlement, or ability to be in the middle of a crowd without ever actually interacting with other people, but it’s obnoxious. I thought it was bad enough when I had to listen to people talking on their phones in line at Target, now I have to be privy to their Netflix playlist.