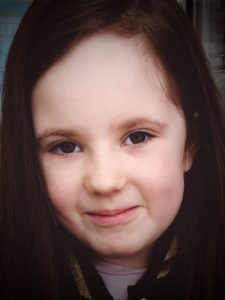 I took my daughter to get her hair cut last weekend. She has ridiculously thick, curly hair. It is beautiful, but when it gets too long it gets tangles. Some are so bad that it looks like she is working on some natural dreadlocks. One day I expect her to walk out of her room with a crocheted beanie on saying “Ya mon.”

Her hair is hard for me to deal with since I have the exact opposite hair. Mine is thin, soft and fine, much like an infant’s. We spend a lot of mornings fighting over the maintenance of the nest attached to the back of her head. I explain to her that even if she can’t see the back of her head it still needs to be brushed. She disagrees.

I started taking her to the salon when she was just a toddler, mostly because her hair was already getting out of control by the age of two. She has never cared much for it. I can’t wrap my head around that because the salon has always been one of my happy places. Maybe it’s because she has a hard time sitting still for long or maybe it’s because my little control freak can’t stand having her head in the sink staring at the ceiling. Even as a baby she hated lying on her back. Whatever the reason, she usually only lasts for about 15 minutes before she starts getting antsy.

Last weekend was her first visit to our new salon and stylist. I fully expected her to start squirming before the scissors even came out. Surprisingly, she didn’t start to dance around until after the blow dryer was put away. As our stylist was putting the finishing touches on her new do my daughter asked how much longer it would take. She got a clever response of “girl, beauty takes time!” to which my little mini-me responded “yeah, and lots of money!”