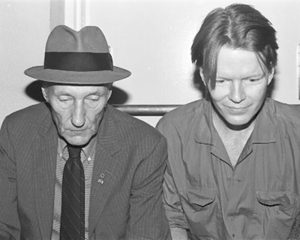 I was listening to the radio this morning as I was getting dressed and a cover of the Jim Carroll song “People Who Died” came on. Somehow I was quickly singing along. I had no idea that I knew the words to that song. As I was listening I was thinking that he had a pretty diverse group of people that he knew. I mean, if I were the one writing that song it would go: overdose, cancer, suicide, cancer, cancer, car crash, overdose, aneurysm, car crash, cancer, old age. I don’t know anyone who took a bullet while robbing a store or anyone who was offed by a biker gang. When I was in my early 20s I was in a bar when two guys shoved their way through the front door and started shooting. One of the bouncers was killed and another wounded, but I didn’t technically know them. The closest I got to this tragedy was helping my friend wipe blood off his shoes later that night. That wouldn’t make for a great song, or even a great story for that matter. A haiku would be about the max I could get out of that experience.

As I was singing along, a few thoughts were going through my brain. First, I was thinking that of course the same guy who wrote “The Basketball Diaries”  knew a lot of people who died, even before he was old enough to drink legally. My other thought was that he knew a lot of guys named Bobby and they all seemed to be dead. I wonder if he had any friends named Bobby still living. I also wonder if he had any friends named Bob and if they were still living. Maybe adding that “by” was, in fact, bad luck for all the Bobs out there. Maybe there is a direct correlation between mortality and dropping the “i” or “y” from your name. I was a Jenni for years before I became a Jen. I just considered this name shortening as a right of passage into so-called adulthood. I never thought it may have hypothetically saved my life.

But to me the most fascinating person in this song is the bride of drano Bobby. I have to wonder about a woman who’s husband feels compelled to drink a bottle of poison the night he marries her. It took my husband at least three years before a thought like this occurred to him in an effort to escape me. Even then I think his thoughts were more geared toward feeding me drano, or arsenic. I wonder if she had a large life insurance policy on her new husband, or if he just really hated her and wanted to scar her for life. So many unanswered questions in this one line of a song. There should have been a b-side to this single or at least an album insert that gave the background on some of these people who died. Someone really needs to write a follow up to this. The world at large should be thanking their lucky stars right now that I am not a musician.