Holiday in the Sun 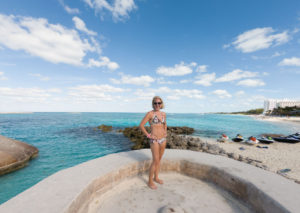 Since my daughter was thirteen months old we have vacationed in Atlantis. It’s been a few years since we have been here because my husband has this crazy idea that there should be a direct correlation between my income and the number of vacations we take. He worries about money more than anyone I know. Maybe it’s because I am capable of spending $1,000 while walking through the airport. There is a candy store in the resort that I have been known to spend upwards of $300 at. In my defense, the bulk rate is $5 per 1/4 pound. When the whole family tags along on vacation I go for a run every morning to pick out our spot by our favorite pool just so I can stop at the candy store and Starbucks on my way back to the room. I return sweaty, awake and ready for fun. My family, who are all eating breakfast, never questions why I’m not hungry. I am actually pretty proud of myself for only spending $90 at the candy store this week. You know you have a sugar problem when you can make that kind of statement. 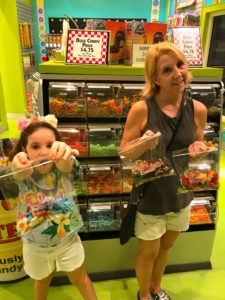 Over the years our activities have changed based on the age of my daughter and if the old folks are traveling with us. Six years ago we started at the shallow, zero entry pools and beaches. We worked our way up to the kids pools, smaller slides and beaches with bigger waves. We have finally graduated to the big slides and dangerously rough waves. My little adrenaline junkie was running out on the closed beach demanding to jump in the waves and dragging me up the power tower to fly air born down a slide on a two person tube. We literally were air born for the first drop. The two of us combined weigh about as much as the average male so we bounce around like a pinball down most of the slides. Fortunately for me her favorite slide is the one that spits you out into a tube in the shark tank. You get to float through as sharks swim all around you. To me, that shark tank is one of the happiest places on earth. My husband joked that if I were super rich I would be one of those lunatics that buys exotic animals. Instead of tigers and llamas I would have an enormous tank of sharks. I would be at parties where people like Kanye West and his giant-assed wife talk about their Ferraris and Maseradis and I would be like “Yeah, that’s cool. I have a nurse shark, a reef shark, two blacktips and a hammerhead”. Thank God I’m not super rich because I am enough of an asshole already. 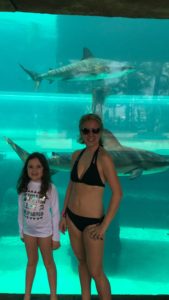 Speaking of assholes, I never encounter as many as I do on vacation. I remember the very first time my husband and I traveled to Atlantis and a group of twenty-somethings came walking through the aquarium with a boom box playing something awful like Pitbul or Lil’ somebody or other. I thought it was the cast of Jersey Shore but nobody was falling down drunk or taking their clothes off so I think it was just some other random idiots. I also thought this was a one time thing that I would never again see in my life. Sadly, I was very wrong. We encountered several groups of people walking around playing music on their phones. Strangely, they all had the same hair as the guys on that Jersey Shore show. I am beginning to think maybe this is a New Jersey thing. It must be loud with everyone walking around with their phones blaring. My husband overheard one of the women in one of these groups talking about being somewhere that was too classy for them so they had to come over to this pool where it was more relaxed. She was wearing a bathing suit that said “Barbie” on the front. I have far too many things to say about this, so I will just not say anything.

The second type of asshole we encounter on vacation is the woman who feels the need to wear full makeup and false eyelashes to ride on water slides.Seriously, who does this? At least a few dozen women from what I saw this week. My favorite part about watching these women is seeing them at the bottom of the slide with their makeup running and eyelashes hanging half off one eye like a little caterpillar jumped on their face as their tube made it’s way down the slide. One woman stood out even among these clowns. She wore hot pink eye shadow with gold polka dots, false eyelashes that looked like two barbers combs taped to her eyelids and a red swimming cap. Yes, a red swimming cap. My seven year old couldn’t stop laughing when she saw this woman standing a few stairs ahead of us getting ready for the tallest slide at the place. When children are laughing at you it might be time to evaluate how you have become a caricature of yourself. I never saw if she actually made it onto a slide. Somehow I think she is probably still standing there talking about her weave getting wet and asking the attendant why she can’t wear her thirteen bangle bracelets and layers of gold necklaces down the slide. Some people just want to be seen. Others want to be seen from space. 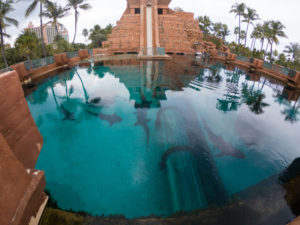 My all time favorite of the vacation assholes is the drunken train wreck. I don’t know what it is about water that can turn your average heavy drinker into a total shit show but it happens. There are a lot of people sitting around the pool enjoying fruity cocktails of the alcoholic variety. They are relaxing on vacation and having a drink or two while they watch their kids play in the water. Then there is the middle aged woman who can hardly keep herself upright making a spectacle of herself. A few days ago my husband came back from a slide with my daughter trailing behind him. He told me a drunk woman almost fell on top of our daughter. My only response to this was it was probably best that he was the one with her when it happened or the woman may have quickly become a toothless drunken mess. I don’t care what you do to yourself, but don’t put my child in danger. An hour later we were standing in line at the bar behind a couple of women ordering drinks very loudly and promptly spilling half of them when they arrived. I pointed at one of the women and asked my husband if it was the woman and he laughed that I could pick her out so easily. It wasn’t that hard considering she was having difficulty holding herself upright at the bar. As we ordered our virgin pina coladas she slurred loudly “Virgin? No, you need alcohol!” to which I loudly replied “You clearly don’t need any more alcohol. You are already embarrassing yourself”. Had she not almost taken my kid out I probably wouldn’t have said anything but I really couldn’t help myself. I don’t think she heard me, but her friend did. I watched as she danced off to a group of cabana boys and starte 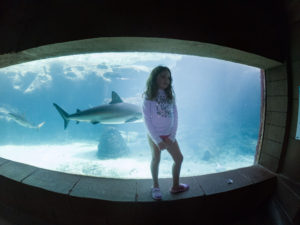 d high fiving them. I was mentally preparing myself for when she started stripping because it looked like she might start taking off her clothes any minute. As we walked away, a guy walking behind us commented on how trashed the woman was. He said he watched her almost fall in a pool earlier. When he said he hoped she didn’t hurt herself or anyone else my response was that I hoped she didn’t hurt anyone else, but her hurting herself wouldn’t be the worst thing. Knocking out her front teeth or almost drowning could be the rock bottom she needed to get herself some help. But who am I to say? I’m just happy she was the only person we encountered in our week stay that was that drunk. I don’t drink and I don’t have a lot of patience for people who are too drunk to take care of themselves. That probably makes me an asshole, but I’m okay with that. I’m sure I made someone else’s list of vacation assholes.