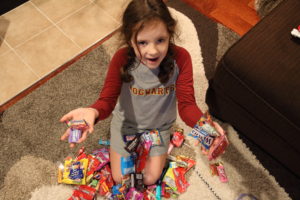 My daughter busted us eating her candy at least three times in the past week. I would like to say that this only happens around Halloween, but it’s not true. It’s an ongoing battle in our house. Whenever our daughter brings home candy she puts it in a cup in the cupboard. She has her daily piece from this stash. My husband also has his daily piece from this stash. I might also dig into the cup now and then depending on which side of the bed my little mini me crawled out of. All of a sudden the candy is gone and everybody is blaming each other for eating it all. The same thing happens with cereal. Anything sweet just seems to disappear in our house. It’s like living with magicians, or burglars.

This year on Halloween we went trick or treating with one of Riley’s classmates. Her parents were gracious enough to have us over even though the Mom was due with baby number two a few days later. We had pizza and salad and the dads took the girls out trick or treating. The moms hung back and passed out candy. It worked out pretty well because I could jump up and get to the door pretty quickly and let preggers take her time to get up to see the kids. After a few hours and several tumbles in the grass our girls and their handlers returned with their loot. 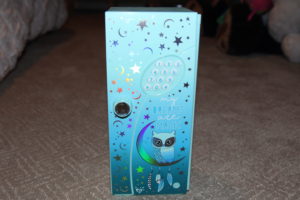 My daughter considered the candy hers and hers alone. My husband figured since he had to follow her around in the cold he deserved some of the candy as well. She tipped us out with chocolate bars that she didn’t like and sent us on our way that night. Since then the bag has been sitting in our kitchen, and all three of us have been eating from it, quietly when nobody else is looking. The bag has started to sag as the candy has gotten up and walked away on it’s own.

Last week my daughter finally organized all of her candy. She gave some to me, some to her dad and the rest she put back in her bag. I don’t know if she has created a candy spreadsheet, but she is definitely trying to control her inventory. She has taken stock of the laffy taffy and starburst, the jolly ranchers and twizzlers. She knows exactly what should be in that bag. I’m not going to tell her about the skittles wrapper I found while doing the laundry last night. I think her dad may have helped some little rainbow candy escape a child’s mouth. The wrapper was tucked into a box of dryer sheets. The garbage can was two feet away but I’m sure he had just been scolded for the wrappers she found in the kitchen garbage can while he was trying to hide the evidence of his latest theft. For a sugar junkie he’s really bad at covering his tracks. I mean, come on man, it takes two seconds to wrap it up in a kleenex or something else gross she would never touch while looking in the garbage. Total amateur.

Over the summer she bought herself a little locker to protect her valuables. She doesn’t keep her jewelry or money in it, she hides her candy from her parents. I’m guessing she will put some of her Halloween candy in there. It’s only a matter of time before she realizes that the bag is dwindling at night. Luckily she has given me the combination since she thinks it is only her dad who eats her candy while she sleeps.