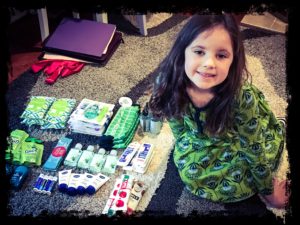 About a month ago my daughter and I were out driving, running errands and shopping. She saw a homeless man on the side of the road. As we drove by she said “I wish we could help that man” and I told her we could. I didn’t have a single dollar in my purse at the time we were driving by but I did have a credit card and the need to teach my daughter that being part of the world means taking care of each other. I told her how people could help, by giving money or helping find a place to sleep. We talked about how we could help and decided that making packages of things that people might need living on the street may be a good place to start. We went home and I looked up online what other people were putting in these care packages that are known as blessing bags. Half of the food items included were already in our cupboards so I made a list of the other items we would need and headed to Target. I bought four of everything so we could have four bags in the car to hand out. I printed out some free resource phone numbers to include in each bag with numbers to national hotlines for runaways, victims of domestic abuse, drug addiction treatment centers, and veterans assistance and my daughter wrote a note to put in each of the bags. We formed a little assembly line and packed the bags pretty quickly but they were only about half full so I started grabbing granola bars and trail mixes from our cupboards. We were able to fill the bags to the top but I was probably going to have to make another run to Costco to restock our cabinets. No problem, I love that place almost as much as I love Target.

We filled four bags which now sit in my backseat along with the clothes and sheets I am passing on to friends with kids who are a little younger than my daughter. Someone looking in my car would think I lived in there with all the blankets and bags and pencils. I have a car full of love in so many ways. 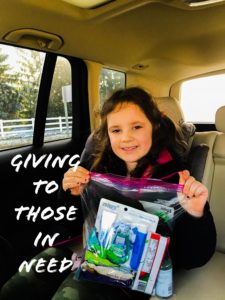 My daughter was able to hand out a bag yesterday. We passed by the man who we see frequently on our way to Costco. The light was green and there wasn’t a chance to stop so I drove down and turned around so we could come back to him. Luckily we were able to come to a stop with little traffic behind us and my husband handed him the bag. The man thanked us and ran back to where he had his backpack sitting by the road and we went along to run our errands.

As we were pulling in to Costco my friend called to tell me she was driving right behind me. She had misplaced her membership card and asked if she could walk in with us. I was so happy to see her and get a hug.that I almost got out of the car while I was still behind the wheel. Now I understand why the parking lot is always chaotic. People like me are parking their cars badly and running off to see their friends. This is a friend who I see pretty regularly and will not be able to see for a few weeks with our busy schedules, holidays and vacations. I wasn’t expecting to see her until the first week of December, but our little detour to do a good deed put us right in front of her a few weeks earlier.

I love when things like that happen.It’s like the universe smiling down and saying thanks for taking care of each other, now here is a little something to make your day better.