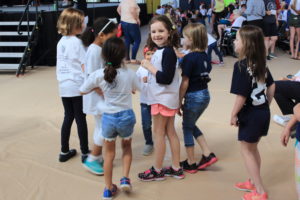 I’m bad with names. I always have been. I have tried to use all of the tricks they teach like using people’s name right away when you meet them or associating their name with something familiar, but those tools don’t work well for me. I think I come by it naturally. When my parents got new neighbors years ago my Dad called the man Pedro for a year. I, of course, also called him Pedro. His name is Hector. I don’t know what my mom called him for that first year, but I hope at least one of us got it right.

Sometimes I will be introduced to someone I know I want to talk to again. I will say their name over again and again in my head before I begin a conversation with them. I walk up thinking “Bob, Bob, Bob” and say “Hi Tom!” Usually Bob doesn’t really want to talk to me after that. Either does Tom. So now, unless I am absolutely sure about someone’s name I don’t use it.

I have been a little better when it comes to my daughter’s classmates. Luckily I only have a few dozen to remember and they don’t change from year to year. There are a few that I get mixed up though and it happens repeatedly. There are two girls who are equally cute but not twins by any means and every single time I see one of them the other one’s name pops in my head. My child has corrected me on this at least a dozen times and I still get it wrong. The worst part is I have now called one of the girls by the other one’s name to her mom three times. I walked right over to her yesterday and said “Oh, Riley’s desk is right across from Jillian’s” to Adlyn’s mom. She just smiled at me politely like she was happy to hear it. I had actually been on a field trip where three moms were supervising four children with Adlyn and her mom and I am still calling this poor child by the wrong name.

I also have to remind myself repeatedly while talking to any of the moms in my daughter’s class their first names because I will undoubtedly call them by their child’s name at least once. I remember when Sex in the City was popular and everyone wanted a necklace with their name on it like Carrie wore. Can we bring that back? That would be really helpful for people like me. Until then maybe I should walk around with a stack of name tags and a sharpie in my purse and label anyone who strikes up a conversation with me.

I would like to hope this is something that gets better with time, but I listened to my dad call my friend’s daughter by the wrong name for two days last week so I fear that it is probably something that is just going to get worse for me as well. I’m expecting within the next five years I will be calling my husband Kevin and my daughter Alexa and they are just going to have to get used to it.