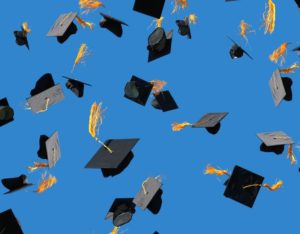 Graduation parties are always fun because they bring together groups of people who wouldn’t normally be at the same party. You have the graduate and his friends, family, friends of the parents of the graduate as well as co-workers, neighbors and anyone else the graduate may have come into contact with over the course of their seventeen years on the planet. So you often times have people from all walks of life in the same space for a few hours. It’s kind of like being at the post office, but with cake. I attended a graduation party this summer for my cousin’s son – also known as my daughter’s favorite cousin. He has three sisters so he puts up with a lot of abuse, and he is the sweetest guy, probably because of it.

Walking in to the party there was a group of people coming up that I didn’t know. It’s not that unusual that I would run into people at my cousin’s house who I didn’t know, but one of them in particular was someone I didn’t expect to see in my life. She was a larger African American woman who could have been in the cast of “Orange is the New Black”. It took me a little bit of time in wandering around the party and catching bits and pieces of conversations to put two and two together that she was in fact an ex-convict that was one of the women that my cousin met at his previous job. He worked at a women’s correctional facility as an electrician and they had a program that taught the inmates job skills for when they were released.

I spent a lot of the time at the party shadowing my daughter as she followed the older kids around playing. Most of her cousins are older than she is so she chases them around trying to keep up for awhile. Then she finally gives up and plays with her younger male cousin who is always up for jumping on the trampoline or running around the house. I chatted with some of my cousins and walked around grazing on food.

At some point my cousin and some of his work friends came in to start doing shots in the kitchen. This is normally about the time I leave parties. I don’t drink and I don’t spend a lot of time around people who are drinking a lot unless I am at concerts, and even then, I don’t really interact with people who are drinking heavily. As I was getting my daughter prepared to leave, Crazy Eyes came walking over with my cousin in tow asking “Who is this lady? I’ve been seeing her all day and I really need to meet her.” She said this all swaying a little and smiling at me like she was the big bad wolf getting ready to devour me. My cousin introduced me and she went on to tell me how my cousin saved her life, that she would probably be out on the street if it weren’t for his help. It warmed my heart to hear that my cousin was able to help someone in this way. I had heard many of the crazy stories about the inmates and what went on behind bars. But here was a woman who he helped to guide in the right direction just by helping provide her a skill that would keep her on the straight and narrow once she was back on her own.

I was also very aware that she had been holding onto my hand the entire time she told this story and had stepped in a little closer. A little bit of liquid lubricant and a heart warming story had turned my cousin’s kitchen into a lesbian bar on 8 mile. I told her it was lovely to meet her, wished her the best of luck in her endeavors and headed for the door. It took us another twenty minutes to actually leave since my daughter had found the guest of honor and had to go sign his graduation guest book stuffed dog. They said their goodbyes as we headed out to the car. I just love graduation parties. It is truly the only place I ever get hit on by ex-convict lesbians anymore. I really am getting rather old and dull.