Mother of the Year Part Eleven Million and One 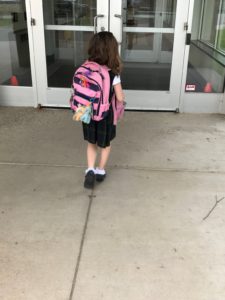 My daughter attends the same school that I went to as a kid. It’s a small Catholic school with many long standing traditions. At the end of school masses and functions everyone in attendance sings the school song, gouter is shared daily and there are service days and conge. Another long standing tradition is the 1:15 dismissal on Wednesdays. Growing up, Wednesday was my favorite day because my dad would pick me up from school and we would go eat french onion soup and hang out. When the weather was nice, he would pick me up on his motorcycle. Some of my fondest memories as a child occurred on Wednesdays.

My daughter has been picked up from school at 1:15 by her grandparents for the last four years. They drove to the school yesterday just like every other previous Wednesday only to find a bunch of younger children waiting to get picked up, but not their grandchild. My daughter is now in second grade which is lower school and lower school does not have early dismissal on any day. I would have known this if I had looked at things like the website, school forms or after school sign ups, but I didn’t. My memory of Wednesday afternoons with my dad was so strong that it never even occurred to me that things may have changed in the thirty years since I ran through those doors to jump on the back of his motorcycle. So everyone in my family was under the impression that my kiddo would get to spend Wednesday afternoons with her grandparents the same way I spent them with my dad, but this is not the case.

Needless to say, my parents were pretty disappointed to not be able to spend that time with their favorite person on the planet, my daughter was sad that she didn’t get to see her grandparents and I’m pretty much where I always am, screwing things up somehow. I did at least get to laugh with the faculty when I picked up my daughter at her normal dismissal time. I told them I would see them at 1:15 next week.

I wrote this while listening to The Chats.