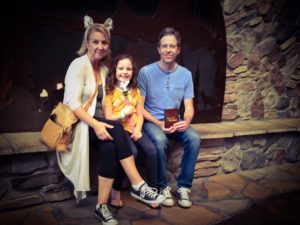 My daughter is a very kind child. It’s one of her greatest attributes and I hope she is always able to reach into that place in herself and remain kind as she grows up and learns that others in the world are not often like her. She displayed some of this kindness while we were on a family vacation this weekend, and as always I was impressed with her ability to be compassionate at such a young age.

We go to a Great Wolf Lodge a few times a year for little weekend getaways. It’s a hotel with a water park and other fun stuff for kids to do. My parents love spending time with Riley and they decided since we hadn’t gotten away for a little while as a family, we should all go. So the five of us jumped in the car and took a little three hour trip up north. I have to say, my parents are great sports when it comes to doing things for their grandchild. We stayed in a suite that had a little log cabin in one room with bunk beds. My husband and I slept in there with our daughter the first night and it was like sleeping on a medieval torture device. When she declared she wanted her grandparents to sleep in there the second night they gladly agreed. They had seen the beds and my husband and myself after a night in the beds, but they slept there anyway. They also dragged their elderly butts up 57 steps to the top of a three person raft water slide repeatedly over the course of the weekend just to be able to bounce around and hear their grandchild laugh firsthand. I know it was 57 steps because my mother counted them on her first trip up. 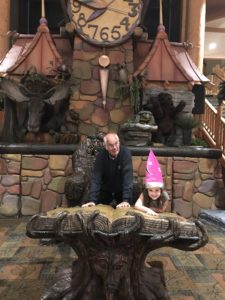 One of the other activities that my daughter likes to do at the hotel is called Magic Quest. It’s basically a bunch of scavenger hunts in the hotel to earn badges. If you complete all of the quests you are named a master magi, a title which is highly revered by seven year olds. My daughter spent many hours in between playing in the water park, pumping half of my dad’s paycheck into arcade games and stuffing all form of sugar in her mouth running around the hotel gathering runes to complete her quests. Her favorite person to do this with was of course her grandpa. We all got to play at some point, but by the end of the trip she was grabbing his hand and sneaking out the door to go adventuring with her favorite playmate.

On our day of departure she had one more quest to complete to become a quest master. She and her grandpa were working diligently to complete the job before we had to leave. With only about fifteen minutes to go they ran across a little boy who was struggling to complete the quest he was working on. They stopped to help and my dad explained to her that if she helped the little boy she would not have time to finish her own quest and become a master. She thought about it for a few moments and said “that’s okay, he needs help. I want to help him.” So she did. She abandoned her own journey to help him finish his quest with no complaints. I came in after loading the car and started to round up the troops when my dad shared this story with me. He said “You created a good one there.” I would have to agree. 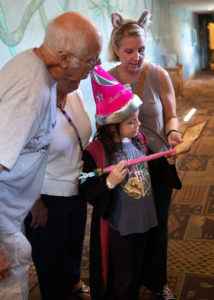 We all gathered together and helped our little magi who had to go back to the beginning of her quest and start over because there was a time limit. She ran around the hotel and with a little help from her dad and myself, she was able to find all of the runes and become a master magi. It’s funny the things you learn from your kids. Earlier in the trip my daughter had stopped to pick up a pair of wolf ears that a little girl dropped on the floor. She handed them back to the little girl who was in a panic because at first she thought that my daughter was picking up the ears for herself. The girl turned to her mother and said “Mama, that little girl just gave me back my ears. She picked them up for me!” She was surprised by my daughter’s kindness. I watched lots of other kids pushing and shoving their way through lines, knocking down smaller kids over the weekend. I even watched a dad leave his kid behind on the steps to make it to the front of the line for a raft. I am grateful that my daughter isn’t making her way through life like that. I’m proud of her for stopping to pick up the ears for another kid, and for abandoning her mission to help someone else because it was the right thing to do. We did create a pretty good little human being. I am so grateful that I get to learn from her every day.