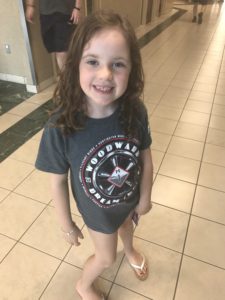 The Woodward Dream Cruise is an annual gathering of grease monkeys, old timers reliving their glory days through metal and rubber and muscle car junkies. What started as a one day event has slowly turned into a week long series of events and traffic nightmare. People line up lawn chairs along the curb for miles waiting for the pageantry as mustangs and bitchin’ camaros burn rubber. Lime green hearses and airbrushed vans also cruise up and down the avenue as well as the occasional 1978 rusted out pinto. It is a giant pain in the ass for everyone else traveling within five square miles of the ten mile stretch for a week.

We are a car family. Fast cars. I have heard stories about my dad’s mom racing anyone who pulled up next to her in her Chevelle. Years later I did the same thing in my mustangs and porsche. I vividly recall my dad waking me up to watch the car race scene in Bullitt when I was a teenager. The rumbling of a big block engine elicits in me the same response as the aroma of chocolate chip cookies coming out of grandma’s oven.

Needless to say, my dad is all about the dream cruise and all it entails. He has rented hotel rooms for the day to have a place to keep snacks and have easy access to a bathroom for his friends and family as we sat under tents watching cars roll past for hours on end. This year he bought VIP tickets to an event at the beginning of the week called “Road Kill” which was drag racing at the northern most part of the Dream Cruise stretch. He spent an entire day with his friends watching cars peel out. He brought home souvenir foam fingers and back packs which my daughter has been carrying around for days. 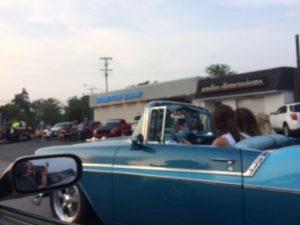 He has been trying to get her as excited about cars as he and I both get with little luck. She doesn’t quite get it yet, being only seven and not having actually put the petal to the metal. She is a late bloomer in my family. I was on my first motorcycle ride at six months old and wearing my first helmet by age three. I was also driving a motorcycle by this age. This is the first summer that my kiddo has actually started to feel the need for speed. She has driven her dad’s car a few times and the wave runners on the lake.

And this year she went cruising with grandpa during the dream cruise. He picked her up on a Wednesday night in my mom’s convertible and they went driving around checking out cars for a few hours. She even took a few pictures and chatted up some of the drivers. She came home with her first dream cruise t-shirt and has been asking me to tell her stories about all of my old cars and racing. I think she has finally been inducted into the family tradition. Watch out world, here comes another little thrill seeker.