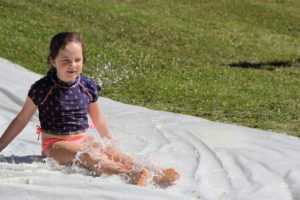 I dropped my daughter off at camp today for “slime week”. It’s a full week of making slime, playing with slime, slip and sliding in slime and probably bathing in slime. As long as she is not sniffing the glue they are making the slime with, I’m totally okay with this. Also, as long as they are not sending any of said slime home with my kid, it’s good. I don’t need a single other thing that can get ground into my couch.

As I was walking out of the building there was a mom with two young boys almost in tears. She had brought her boys to soccer camp the wrong week. They were signed up for next week. She was on the phone with her husband trying to figure out what happened. And if she is anything like me she was trying to make sure the blame fell squarely on the man of the house. I felt for her. Camp is a giant pain in the ass.

Normally I wouldn’t say this. I would say camp is the thing that is saving my sanity after spending every day of the first half of the summer with my daughter who knows how to press every single button I have. But this year, the process of getting my child to camp has been full of complications. It’s my own fault too which makes it even worse. I always send my kid to camp at her school which is totally hassle free. This year my daughter decided that in addition to a few weeks at her school she wants to attend a few weeks of camp at our gym. When I grabbed a registration form from the child care center, the woman behind the desk told me to take the full packet because there were more forms. She wasn’t kidding. There are a dozen forms that need to be filled out, signed in blood, notarized and delivered by a judge. 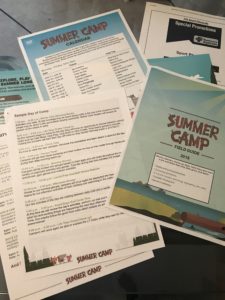 One of the forms is a health appraisal form which needs a signature from her doctor. This is the form I turn in every year to her school, but I don’t have a copy and it’s summer, so I can’t exactly get a copy from the school. I, of course, called the doctor’s office. I was promptly told by the uninterested receptionist that they would not give me a form because my daughter is overdue for a visit. I informed her that we have an appointment in two weeks but I need this form now. She basically told me that this was not her problem and she didn’t have the time or desire to help me. When I asked to speak with my daughter’s doctor her response was simply “no”. Seriously, I think this woman saw that David Spade receptionist skit one too many times. I left my number for a call back from the pediatrician (which I am still waiting for) and did a Google search for a new doctor, one that could get us in immediately. Unfortunately not a single office can get us in for a month, but I talked to a very nice man at an office a few miles from our house who told me that I can get my daughter the form she needs by going to a local urgent care for a sports physical. He saved me a giant headache so I rewarded (punished) him by setting up a new patient appointment for next month.

I spent four hours on the phone, found a new pediatrician for my child, added three more things to my “to do” list, discovered another annoyance that could send me to anger management, and still not filled out a single form in the dictionary-sized package I need to submit before my daughter can go to camp next week. I have come to the conclusion that it will take me from now until the day she goes to camp to actually complete this paperwork. God help me. Now I understand why parents go on vacation when their kids go to sleep-away camp.

The best part of all of this is after reading through the paperwork I quickly learned that the health appraisal form I was going into apoplexy over is not necessary as long as I certify that it exists. I really should investigate a little more before I get my panties in a bunch about something that may not even be an issue. Oh yeah, and my daughter brought home slime and promptly managed to smear it into the couch.

I wrote this blog while listening to the new Interrupters album!