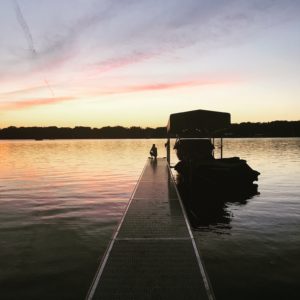 The view is worth the work

My parents bought a house on a lake seven years ago. Each year we seem to spend a little more time out there and each year my dad somehow acquires more toys for the water. He started out with a couple of wave runners and started adding rafts he could pull behind the wave runners as my daughter got a little older. Then he finally bought himself a boat. And of course he had to buy a bigger raft to pull behind the boat. My mom acquires her own water toys yearly, mostly of the floating pineapple and alligator variety. It now takes about three hours to get all of the water toys ready for us to use for an hour. My dad actually pulls a cart behind his riding lawnmower stacked 6′ high with every type of flotation device imaginable. But we love it.

My dad and the seven year old are the only ones who drive the boat. My dad is the only one who parks the boat because getting it pulled onto the boat lift can be challenging. Sometimes it takes my dad a few efforts to get there. Because of this he usually loads up the boat with enough people and provisions to stay out on the lake for awhile.

The other day my parents had a party for the Fourth of July. All of my cousins and their kids were there and most of them wanted to go rafting. We jumped in the boat and took a bunch of the littles for a ride around the lake. We went around and around, trading places on the four person bouncing couch until I had a permanent kink in my neck and the youngest was ready to head to shore. When we pulled back in we pulled the boat up onto the lift but didn’t raise it, since we would be heading back out. It had been hard to push the boat off and the front end was far enough out of the water that it wasn’t going anywhere. Or so we thought… 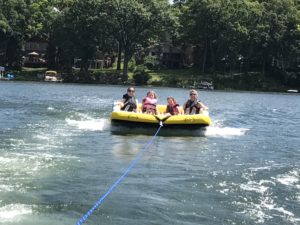 My dad and husband headed into the house for some food as all of the other adults hung around on the deck and in the yard. The kids all took off to play some lawn games and take a rest from being in the water. Ten minutes later I heard someone yelling “you’re losing your boat! Your boat is floating away!” I looked down to the water to see my dad’s boat bobbing in the water about fifteen feet from the dock. It was in between two docks headed right for a bunch of women and children floating around on their little blow up unicorns and flamingos. Luckily my parents’ neighbor and one of his friends were right there and were quickly pushing my dad’s boat back toward the lift. On a side note – I’m fairly convinced that my parents’ neighbor likes our family so much because we are always ready to turn him into the hero of the day. He is fairly consistently bailing us out of some lake dilemma.

Of course this happened when the two people who would know what to do were nowhere to be found. All of the other guys were not even wearing bathing suits and nobody who was outside could be of much help. So, it was apparently going to be up to me to get the boat back with the help of the neighbors. I ran into the water and started pulling the front of the boat onto the lift as the neighbor pushed from the back. Luckily the boat had just started floating away when they caught it so there wasn’t far to go, but we still had to get it back onto the lift. 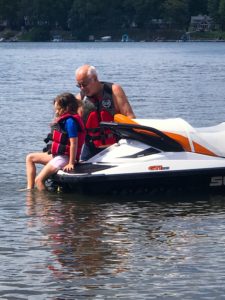 Luckily the big guns were there. My family has been calling me “the big guns” for a year. I got the name when three guys were trying to push the boat onto the lift last year with little luck. I walked up and said “get out of the way and let the big guns get it” as they all laughed at me. They shut up a minute later when I successfully pulled the boat onto the lift from the front. Truth be told, my ass did most of the work. I pulled on the front of the boat while sitting down into the water. It just sounds a lot better to be called “big guns” than “big ass”.

On this day, we were pretty much in the same position as the day I got my nickname. And I got myself in the same position as before and pulled as I sat back into the water. My ass once again did the work and my arms got the credit. Sorry ass, that’s the way it goes. I was at the tail end of pulling the boat onto the lift when my dad walked out onto the dock after someone had told him what was going on outside. He got in the boat after we had it in position and raised it out of the water a little bit so it would stay secured. 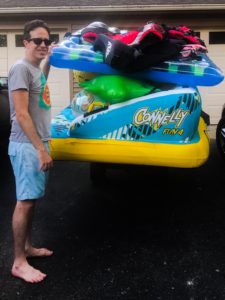 When the littles came running back to the beach to go for another ride my dad suggested we take the wave runners and pull the smaller rafts. I thought it was a pretty good idea considering my guns were done for the day. The kids like the small rafts even more anyway since they fly all over the place and fall off. I opted not to drive for this round of rafting since I had already run into the neighbors’ dock the day before after not being able to find reverse. I have very much secured my position of brawn and not brains in this operation.

You would think that after seven years of part-time lake living we would all be a little better at it. To date we have almost sunk a boat, almost lost a boat, got a boat stuck on the lift, been unable to get a boat on the lift and I have crashed into two docks and run over my dad with a wave runner. Every time I am at the lake I feel a little bit like Eva Gabor in Green Acres, but somehow that water keeps luring me back.