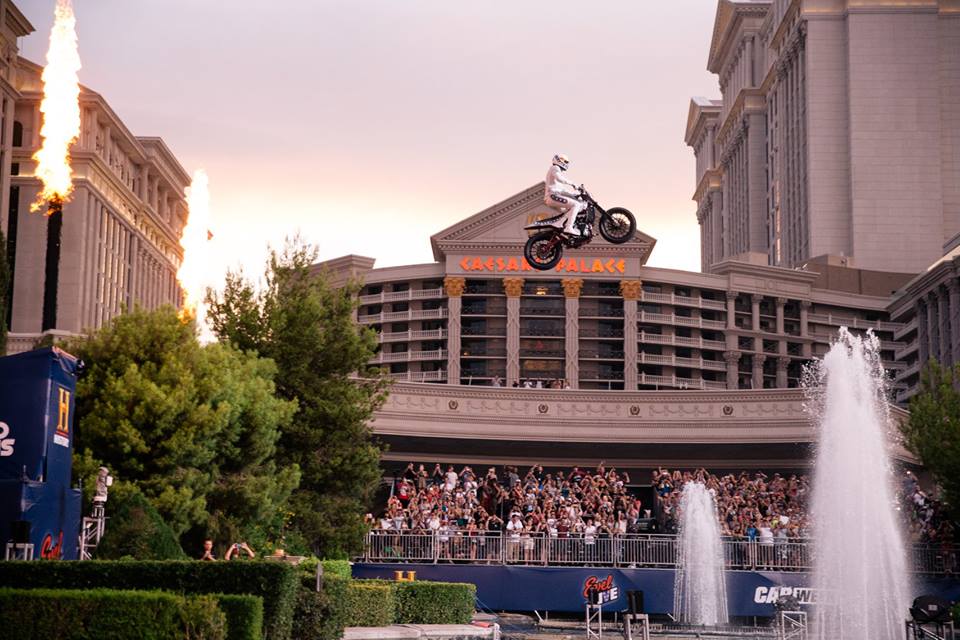 Last week my parents informed me that Erik Estrada – you know, the guy from Chips – was planning to jump a building in Las Vegas on a motorcycle. My first thought was “I wonder if VH1 has some new pseudo-celebrity series that is airing this”. It’s been a little while since some D list celebrity has had a turn in a boxing ring, rehab or semi-scripted vacation that has aired on cable. Danny Bona-douchebag must be making a living at a drive-thru somewhere. My second thought was “I wonder what the insurance coverage is on something like that”. Unfortunately that is just how my brain works. I’m going to go out on a limb and speculate that my Mom obtained this information from watching Fox News.

A few days later I learned that the exhibition in Las Vegas was actually Travis Pastrana beating some of Evil Knievel’s records. I, of course, learned this while stalking Carey Hart’s Instagram account. It’s a good thing I have social media to report news of the non-fake variety. And of course that obsession with heavily tattooed smoking hot motocross guys helps.

When I first received the information about Erik Estrada’s big comeback to showbiz I didn’t think much about whether or not it was legit. As with a lot of information I get from my parents, I gave it a 50/50 shot of being accurate. You see, this is not the first time data has been lost in translation. My dad has left many newspaper clippings over the years about bands he thinks I like or concerts I attended that made the news (often by the amount of arrests). I determined the old man just didn’t know me at all when he left an article about Nickelback on the kitchen table. I almost disowned him right then and there. Over the years he has informed me of more dead musicians than I can count, and almost all of the names he gave me are still alive and well.

Receiving information from him is similar to playing a game of telephone with a three year old. Every now and then he throws something really bizarre at me that I know can’t be true. Like that time he told me Sammy Hagar was the new lead singer of Van Halen. Unfortunately this was one of the few he got right. He also told me some reality television star who bankrupted six companies was running for president. I wasn’t buying it. Once again, he was correct.

My mom is not a whole lot better than my dad, but her misinformation is usually about someone we know. She sometimes gets my cousins confused and I think the one who is pregnant is getting divorced and the one who is divorcing got herself knocked up. I end up congratulating the soon to be single and dropping hints about a great workout plan for the prego. At these times I would feel embarrassed if I were capable of feeling that emotion.