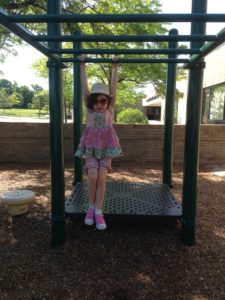 I was watching the news this morning and there was a story about how a toddler was injured at a playground that caught my interest. In the preview they kept showing a picture of a young mom sitting on a slide with her toddler on her lap, all smiles. I was already thinking that the mom was probably the one who accidentally injured the child, and sure enough when the story aired, it was the mom’s fault – although the story wanted to somehow blame playgrounds as a whole. The mom went down the slide with the child in her lap and halfway down the kid’s leg got stuck on the side of the slide and broke.

Things happen. Kids fall. They fall on playground equipment, they fall off of playground equipment. They fall in the grass, on the sidewalk and down the stairs in their own homes on occasion. The world is a giant test course for kids. But this child was hurt because her mom – who barely fit down the slide solo – decided that the child would be safer in her lap than alone. Her leg got caught because there wasn’t enough room in between the mom’s legs for the child’s legs so they were on top, flopping around unsecured. Of course her leg was going to hit the side of the slide and her rubber soled shoe was going to get stuck.

I have done this exact same thing with my daughter and at the time I had two concerns  – her leg getting trapped under me or both of us falling as one unit off the slide. The second situation was probably more likely since gravity and I have never gotten along very well. I remember thinking that I was much too large for the slide and I was about half the size of the mother I was watching on TV. The thing is, I knew that most times when my daughter was trying to climb something or play on something that my interference would muck up the works. She was better off doing things on her own. Me hovering would likely lead to me somehow falling on top of her or tripping her. The few slides that I did descend with her were at least 10′ tall and she was unable to get to the top of them by herself. If one or both of us had been hurt while on the slide I wouldn’t have blamed anyone but myself. This mom was acting as if she had no blame in what happened to her kid. She actually used the “everyone is doing it” excuse. There is some cult member out there just waiting to stumble upon this woman as their newest recruit. 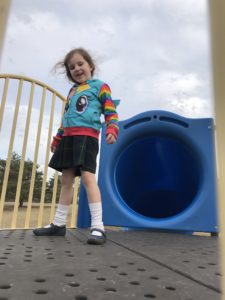 One at a time please!

There are signs at every playground I have ever been to that caution people that the equipment is designed for children ages 2-12. Some even list the ages as 5-12. This mother was advocating there be warning signs at playgrounds of what could happen if an adult were to use the playground equipment. It’s the equivalent of the little pictures on fast food coffee cups explaining that you shouldn’t dump the coffee in your lap because it could burn you. Do we really need more cautionary signs for what could happen if we don’t use common sense? I think we should just start putting up signs that read “Don’t be an idiot.”

I really didn’t want to blame the mom in this story because we moms get blamed for enough already, but when I saw the mom holding her daughter up to hang on to the monkey bars at the end of the story I decided that this particular mom didn’t really deserve the benefit of the doubt. I imagined the child a few years in the future trying to hang by herself from the monkey bars, falling on her face when she couldn’t hold herself up. Kids don’t learn to hang by themselves when their parents always hold them up. I remember the first time my daughter was able to swing from one bar to the next and how proud she was of herself. This was because I told her for several years that if she wanted to play on the monkey bars she would need to do it herself. I wasn’t going to carry her across because that took away the future sense of pride she would one day feel. 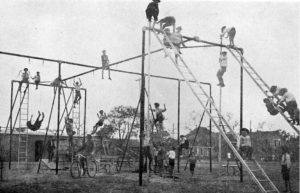 Hang on honey, Mommy’s climbing up right behind you!

The most interesting part of the story was how much playground injuries have increased over the last twenty years. Even though the equipment has become safer, there are more injuries. I would suspect a lot of them are either kids falling off of things the first time their parents aren’t holding them up or the parents otherwise mucking up the works. Twenty years ago children were not having their legs broken on slides all over the place because their parents weren’t insisting on riding tandem. Kids can get hurt enough on their own, they really don’t need mom’s assistance in this area. And no matter how much the lady on the news program blames the playground and their lack of signage, her little girl is still going to grow up and tell the story about how her mom broke her leg when she was a toddler. Welcome to motherhood lady!

I wrote this blog while listening to Dropkick Murphys