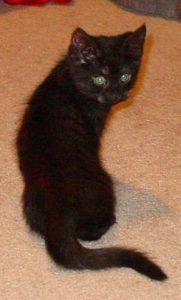 Every child in my daughter’s class got a new pet last year. This is what I hear at least. I know of at least three that did in fact get a dog in the past year. But I’m pretty sure the majority of the remaining twenty two first graders did not get a new pet. Unfortunately, this is the one area where my kid wants to be just like the other kids and now she wants a pet.

She initially asked for a puppy but quickly decided that a kitten would be a better choice based on the ease of poop retrieval. We went through all of the things she would have to do to care for a kitten and she feels strongly that she is capable of doing them. I told her that she would need help that her dad and I are not willing to give right now but she was adamant that she could do it all herself. I learned quickly at the start of this conversations that all of her feelings about this subject were strong – vehement even. She is seven, so most of her thoughts and feelings are life changing. She is pretty sure at this moment her life is incomplete because there is no kitten in it.

I asked her how she would get her kitten to the vet, and asked if she would be driving herself there. She replied “Of course not. I’m a child. I can’t drive!” I thought this was a good place to end the discussion, but she proceeded to list the other ways she could get to the vet. My daughter may not be able to drive, but next time I leave her at school I can ask why she didn’t just call an Uber because she is clearly familiar with how to get a ride. Uber was one of five ways she listed to get to the vet. I didn’t even want to ask how she planned to pay for the veterinary services. 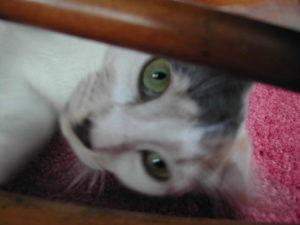 The problem with having a clever child is they have an answer for everything. She badgered me for three hours. She negotiated, cried, made promises that she was clearly not capable of keeping and batted her eyelashes furiously until I finally told her to go ask her dad what he thought. I immediately hid in the closet and read a book. She may be clever, but she is also afraid to go upstairs by herself. I had approximately fifteen minutes of silence. When we reconvened she told me that my husband had told her she should ask her grandparents to get a kitten at their house since she spends so much time there. The problem with this is she could actually wear them down or talk them into it and eventually the kitten would end up in my house. This was not a good plan.

I reminded my daughter that we had a cat when she was little. Said cat had actually been a resident in our house for years before my daughter was born, and I was pretty confident that she would be evicted the second we brought our newest member of the family home. Mommy’s Little Monster – Monster for short was an adorable little ball of neurotic fury. The cat was very clearly insane and very attached to me. Go figure. We were pretty sure she would completely lose her shit when we brought our daughter home, but somehow she didn’t. She actually mellowed for awhile until our baby became a toddler and was able to give chase. She finally turned on her after one too many close calls with sticky fingers and a tail and we had to find Monster a new home. 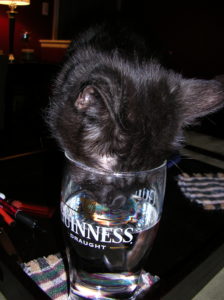 Monster getting her head stuck in a glass – a weekly occurrence

I thought some stories about all of the mischievous things Monster did would persuade my daughter that a kitten was not a good idea. That cat was truly a pain in the butt. I shared how she used to break half of the ornaments on the Christmas tree every year, and how she knocked over my water glass in the middle of the night while trying to take a drink. I shared how she attacked the paper in the printer and sent faxes by lying on the speed dial buttons at 3 am, and how she tried to escape the house every time we opened the door. I told her about the time Monster got trapped in a plastic grocery bag and ran herself stupid around the house until she got stuck behind our bed. When we finally got her out, we found that she had literally scared the shit out of herself and had been bouncing around in a bag full of her own poop for ten minutes. We had to take her into the basement and give her a bath in the washtub after cutting the bag off her body. Everyone involved came out of that experience with new scratches and teeth marks. Instead of being horrified by this, my seven year old found it all hilarious. I had forgotten that one of her favorite activities is terrorizing me, so all of this was incredibly appealing, not appalling.

Unfortunately, I think this is a conversation that will continue all summer. I can’t act surprised, I have seen it coming since she told me about her friends and their new pets throughout the year. She is at the age that pets are entering the picture for a lot of her peers and she is hearing about the fun they are having. I guess it could be worse. Her friend’s mom is pregnant. She could be asking for a baby sibling!