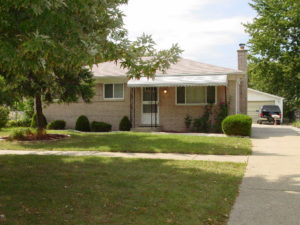 When my husband and I were first married we lived in a little house in a neighborhood that was headed into economic hardship. We lived directly across the street from a condo complex that included government subsidized housing. There lived little old ladies, single moms with gaggles of small children and our favorite resident who we called “Cracky”. She was a middle aged woman who rarely left her front porch but had many visitors. She spent most days – both warm and cold – sitting in her front yard with a tumbler full of booze in her right hand and a cigarette in her left. Mullet and mustache sporting men moved in and out monthly, some leaving in handcuffs and at least one in a body bag.

Cracky was a regular source of entertainment for us during our first few years of marriage. We watched as she drank her days away, hosting parties with loud classic rock blaring from her front windows. We had little choice in watching her antics since she was always louder than our TV and there were always some form of lights or fireworks illuminating the front of her home. When we heard sirens in the neighborhood, there was never a question of where they were headed. We saw at least three bodies removed from the house in black bags, mostly by ambulances, but one in an unmarked minivan. I had no idea the coroner’s office employed outside contractors. Maybe she found a discount service.

She had a grown son who lived with her on and off. One day we watched him pack a bunch of camping equipment and head into the complex. We saw him return every so often after that, but he never stayed long. We made up stories about him moving to the woods and living off the grid in pure paranoid stoner fashion. We were pretty sure he only came home once  a month to bathe. 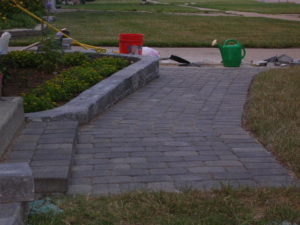 A lot of hard work and a little entertainment

Occasionally Cracky got social while drinking on her porch. She came across the street to chat with my husband and dad as they installed a paver walkway from the driveway to the porch one morning. My dad commented that he thought she was drunk at 10 am. He didn’t know Cracky like we did – she had been loaded since half past 8. She spent twenty minutes hitting on my dad while my husband tried to ignore there was a drunken, half-clad woman tripping all over our yard. I think she finally noticed my dad’s wedding band or her drink was running low because she headed home pretty quickly. Later that day our neighbor told us how he had woken up from a nap one day and she was swimming in his pool – uninvited. I made a mental note to lock our gate.

She returned the following summer when we had a garage sale and offered me a nickel for every item for sale, even a leather jacket with a $10 neon orange price tag attached to the lapel. I offered her a nickel if she would remove herself from my driveway and stop scaring off potential customers. It was again before 10 am and she could barely keep her body above her dollar store flip flops. That was the first and last garage sale we even had. 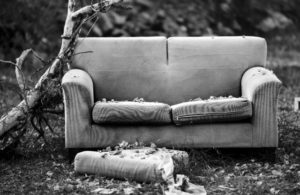 We once put a couch at the curb that had seen better days. I don’t know when those better days were since it had passed through at least four houses before finding it’s way to our basement. It was worn and ugly and had been around the block more times than the ice cream truck. It sat at our curb for approximately 10 seconds before Cracky recruited her son and another dude from inside her house to drag the entire sectional across the street. Apparently a twelve year old couch is cause for a celebration. The couch sat in the center of her front yard as party guests arrived over the course of the afternoon. A bonfire was lit, the coolers were opened and we heard several very out of tune guitars playing “Smoke on the Water” until the sun came up the following morning. We thought the party was over, but apparently a white trash celebration over a dumpster find lasts longer than a Hindu death ritual. Luckily the last guitar string broke within the first day and they resorted to the classic rock radio station for their listening entertainment. It took a summer thunder storm to break up the party. We watched as the guests stumbled over themselves trying to drag the soaking wet piece of furniture into the house without spilling their beers. A few weeks later I came home to see the couch sitting in Cracky’s front yard. This time it was closer to the sidewalk with a giant sign on the front that read “FOR SALE”. I guess she had to pay for her Five O’clock Vodka and Marlboros somehow. I walked over and offered her a nickel.

It’s been awhile since we have moved from that old neighborhood, but I like to think that Cracky is still sitting on her porch, drink in hand, listening to some Sabbath. I’m guessing she is slinking around today, swimming in some poor sap’s pool while they are at work and digging through their garbage for little trinkets to sell to passersby on her sidewalk. I have yet to find a neighbor even half as colorful as Cracky in our new neighborhood.