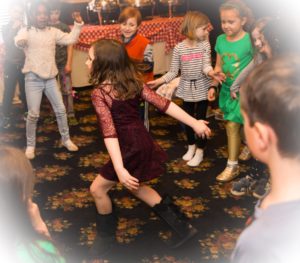 At 7 years old a dance party is a must!

I was born in July. I never knew how lucky my parents were to have a summer baby until I had a child in March and started to throw birthday parties. The weather in Michigan in March is as fickle as Taylor Swift. The day of my daughter’s first birthday party in 2012 was an unseasonably warm day. We had to turn on the air conditioning an hour into the party because it was starting to feel like Aruba in August with thirty people in the house. The following year we had to put extra rugs by the front door for people’s boots. There was over a foot of snow to remove in the driveway. Needless to say, birthday parties are indoor events for our little Logan.

Birthday parties for children are also more extravagant than they were when I was a kid. They are no longer backyard barbeques with Mom’s uneven handmade cake. They are full blown events with themes and party favors and cakes the size of small cars. There is valet parking and wait staff. I used to watch the movie Billy Madison and laugh at the parties at the end of each grade level completed. Now I cringe. I’m waiting to drop off my child at a third grade party to be met by an elephant and giraffe. 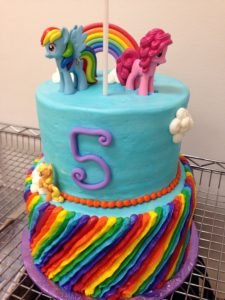 By the time my daughter entered preschool, we decided that alternating between small family parties and larger parties with all of her classmates would be the only way to survive. The last party we had with her whole class was when she turned five and we invited a couple dozen kids to a place that had several rooms full of bounce houses. She had to stand on a chair to blow out the candle on her cake and I spent weeks finding the perfect decorations and party favors.

This year she turned seven. She had some pretty lofty plans for her party. She wanted to go bowling, then rent out a movie theater for a private screening, move on to a restaurant where she would perform a cooking demonstration and then have a giant dance party. This little shindig was apparently going to last several days and cost more than her future wedding. No problem. I told her she should talk to her Grandpa about the party planning. 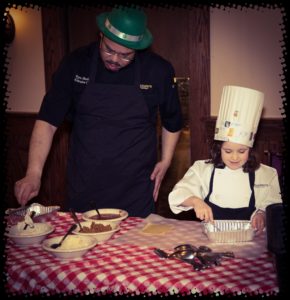 After researching “over the top kids parties that will bankrupt you” for several weeks I narrowed it down to two options – a cupcake battle at a tea room that could accommodate fifteen guests or a cooking demonstration at a local Italian restaurant where her entire class could be invited. She opted for the restaurant. I think this was partially for the chef coat she would receive as a gift and partially because the boys could be included. She even invited a boy that changed schools last year who she misses seeing every day. I’m pretty sure the biggest pull was that she got to stand up at the head table with the chef and help with the demonstration. My kid loves to be the center of attention. I have no idea where she gets this quality from…

I sent out the invitations on a Sunday night and by the following morning I heard back from over half the class that they would be attending. By the week before the party it was established that twenty three kids would be there. Luckily we were able to have the largest banquet room in the building and the party began before lunchtime, so it wouldn’t be too crowded yet. I can’t even imagine trying to usher that many kids through the kitchen or to the bathrooms with a restaurant full of people. It was already similar to cattle herding to get the kids to wash their hands. All I was missing was an electric prod. 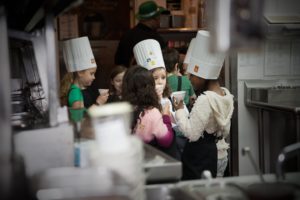 Before they made soup out of one of the party guests…

The chef who led the party was fantastic. When he arrived in the room the kids were playing a giant game of tag that started as soon as three kids stoof together. I had been attempting to slow them down with no luck. As I apologized for their mounting noise he replied “there is nobody in this restaurant and they are being kids”. That was fine for the time being, but the restaurant was going to get busy and the party was only going to get bigger and louder. And we were going to start packing these little beasts full of sugar within an hour.

The kids had a fantastic time during the tour through the kitchen and the cooking demonstration. I was expecting either a giant food fight or complete boredom and we landed somewhere in between with all of the kids laughing and smiling. They were mesmerized by Chef Ryan and he was able to both entertain them and keep them in line. The only problem was that at some point he had to get back to preparing meals for the regular restaurant patrons, and my husband and I were left to wrangle two dozen wound up littles with only the help of my parents. As soon as the chef left the room the game of tag resumed with kids running circles around the waitresses as they brought out beverages. After mounds of pasta, breaded chicken, cookies and brownies were consumed and giant bowls of salad were left untouched at the buffet, we got to opening presents. 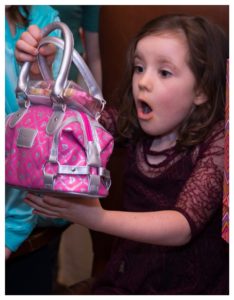 And so it begins…

The trend at birthday parties has been to not open the gifts at the party. Unlike most trends, this is actually something I can get behind. However, we had two more hours of party to go and the kids were fed and ready to get crazy, so we had the little chef open her gifts while sitting in a big chair similar to a throne. One would think this would be a time of peace and relative quiet with no bickering or whining. One would be sadly mistaken. My Dad and I spent the next half hour telling kids to stop crowding and sit down while others yelled that they couldn’t see. The kids that were sitting up front were actually getting stepped on by others trying to wiggle their way up to the throne. It was like a Walmart in the bible belt on Black Friday.

Even the guests at kids birthday parties stick with a theme. The little chef opened aprons and baking sets, cookbooks and rolling pins, and even edible markers to decorate cookies. The child was in heaven. She also, of course, got her fair share of brightly colored craft sets. For the next month she will be making her own bath bombs, stickers, slime and make up, and knitting everything from stuffed animals to hats. She opened enough legos to build us a house which we may be moving into after we pay for this party. 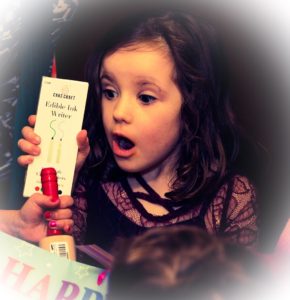 I was happy to see that the Shopkins fad has passed, but now the kids are collecting tiny little dolls that cry and pee while leaving behind a trail of glitter. You buy a ball with no idea what is inside, and that is apparently the fun of this gift. Well, that and the bodily functions it performs. I tried to hide these gifts under the table as quickly as possible before the boys started playing baseball with them. One of our more dainty guests had already been beaned in the head with a squishy cupcake being tossed around like a football.

Within forty minutes the gift table sat empty while the girls huddled around a pile of neon packages. I unsuccessfully tried to gather all of the boxes and bags and match the gifts with the cards that came with them. The boys continued to play football with the giant rubber cupcake and my Dad and I continued to reprimand them for being wild and pray that nobody else got hurt. I came to the conclusion that I would have made a decent defensive back after making a handful of interceptions. 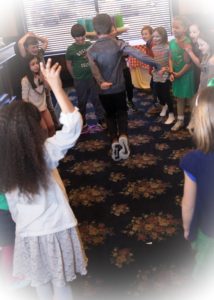 We gave up trying to calm the kids down and instead opted for a more organized chaos. It was time to kick out the jams. I grabbed my little portable speaker from my purse and began streaming the latest Disney movie soundtrack. The kids quickly got into a circle and had a dance off. This produced more tears but also a lot of laughter. They made it all the way around the circle throwing down all of their best moves within about three songs. When I found a full thirty minutes left before parents would arrive to pick up their little gremlins and the dancers were fading, I finally gave up. I was content to let them tear the roof off until my parents brought up the idea of musical chairs.

This game is best played when only one butt fits on a chair. We started the game with six open chairs because all of the girls were huddled at one end sharing seats. The game progressed this way with every round being a toss up when it came to who had the chair first. I let the kids act as referees for themselves unless it was getting too heated and then I pretty much tossed a coin. I was expecting a full force riot once the game ended, but the last two girls in the game were pretty mellow and didn’t much care if they won or lost. The first two players out were harder to eject than the last two.

Most of the kids didn’t leave until a few minutes before we had to vacate the room. I was happy that we were putting every second of the room to use, but I was also exhausted. I would never make it as a teacher. Or a zookeeper for that matter. My newly anointed seven year old headed to the bar to hang out with her grandparents. It was St. Patrick’s Day after all. She promptly lost her balloon and cried. It brought the tear count up to about a thousand for the day. The manager quickly jumped into action and rescued her balloon while we packed up the car. We called it a day about a half an hour after the last child left, and I am pretty sure we will be opening and organizing gifts until the next party. I should probably start planning tomorrow.