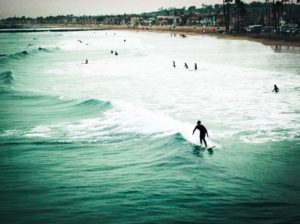 What do you do when an adventure is in front of you? Do you take it or do you look for every reason to say “I can’t”? I come from an adventurous family. We traveled a lot when I was growing up and it was always an adventure. My Dad was the kind of guy who would jump in a car, or better yet on a motorcycle, and just go. And I was right there with him ready for the next big adventure. Most people get less adventurous as they get older. They see enough of life to be scared of what they may be saying yes to and the closer they get to death, the more cautious they become. Not me! I am as carefree and impetuous as ever. When an adventure presents itself to me, I suit up and go for it.

When I was growing up we took a lot of trips by car. During these trips, we would do a lot of sightseeing but it was never planned. My Dad would take a scenic route and we would just see things. It was an adventure. It wasn’t until I got married that I realized that people actually planned to do things on vacation. My family always just showed up and figured out what to do once we got there. When I was thirteen we spent a week in Mexico where we swam, rode jet skis and visited Mayan ruins. My parents rented a car and drove us to Chichen Itza where we climbed ninety nine steps to see an empty room that smelled like feet. We also stopped at a little country store and walked through the backyard zoo where they had baby leopards and cheetahs on leashes in dog cages. You don’t see that by staying on the resort property. You also don’t accidentally drive into the middle of a cock fight in a small village because your uncle isn’t great at reading maps if you stay on the resort property, but we won’t get into that story. It still gives my Mom anxiety to recall all of the villagers peering in our open windows as we smiled and backed out of the dirty back road. We didn’t see anything other than the resort property after that little adventure.

Years later my Dad once again rented a car in a foreign country. We lost a hubcap within five miles driving down an incredibly narrow rural Irish road. We got lost once during that trip as well but it may have been because my Dad and I spent most of the night in Temple Bar and forgot where we were staying. It happens. Luckily, we didn’t wander into any cock fights, although my Dad did wander into a gay bar that was hosting a drag night. If there is an exact opposite of a cock fight, that place was it. It was confusing for the Old Man and ridiculously amusing for me and my Mom. We still bring it up from time to time. In true adventurer form we went to an after hours bar with some locals we just met, and ended up drinking real Irish whiskey in their house. This was all after my Dad almost threw down with the guy at the first bar we were at because he didn’t like Americans. I also made friends with the locals and slung drinks and DJed before crawling back to my room the second night on the Isle. Apparently we had many daytime adventures too, I just slept through most of them, waking up only to take some photos here and there. We returned the rental car with a new hubcap and about 1,000 new miles on the odometer.

When my husband and I first started traveling together it was frustrating to him that I packed the night before leaving and arrived at the airport about thirty minutes before departure for our international flight. In my defense, we have only missed a few flights in the fourteen years we have been traveling together. I have saved him hundreds of hours of my complaining by showing up as the gates are closing. 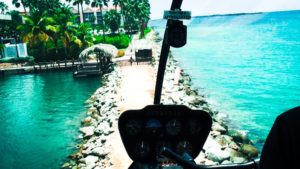 Reading the release forms took longer than the flight!

My better half is a pretty good sport even if he is a little anal about planning. On our honeymoon I got him to go snorkeling and parasailing, although both adventures were booked in advance. A year later he climbed into  a helicopter to fly around the island. He videotaped the event, which I think he is keeping just in case he ever needs to prove how I drove him completely over the edge. That was the same year that he foolishly allowed me to drive our rented Jeep around the island and I got us stuck in the sand more times than I can count.

By the time we went to the Bahamas five years into our marriage we were flying by the seat of our pants. I actually got him to plunge down a sixty foot nearly vertical slide through a shark tank where he almost sterilized himself with his swim trunks. I later sweet talked him into getting into the same shark tank with me to swim with the sharks. He now wants to swim out in the ocean with sharks. He encourages our little girl to go down the scary slides and jump in the water with the baby stingrays. In the past few years she has held starfish and urchins, crabs and even pet a baby shark. She never asks what the plan is, she makes the plans. The kid is an adventure seeker and she doesn’t even know it. 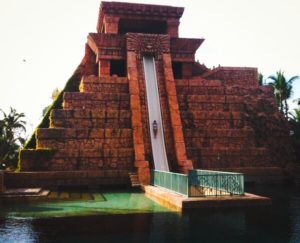 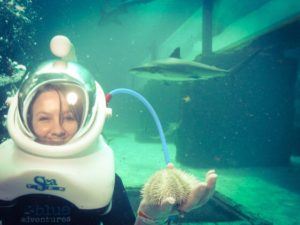 Is it strange to be more afraid of the urchin than the sharks?

I don’t deserve the credit for my husband’s conversion though. It was the trips that we took with my parents in our early years of marriage that brought him over to the fun side. We took a trip to California to go to the Rose Bowl. Over the course of a few days we cruised up and down the Pacific Coast Highway seeing the sights. We stopped at a restaurant named Duke’s in Huntington Beach for lunch one day. The following day we found a restaurant with the same name when we ventured up to Malibu. It was, in fact, owned by the same Duke. We read in the menu all about Duke and his amazing life as a swimmer and surfer. My Mom also read that there was a third Duke’s in Waikiki (there are now six locations). She said it would be a good idea for us to try all three to make sure the food was equally as good at all of the locations. These are the kind of comments that most people laugh about and forget when they return home from vacation. Not my Dad. We ate at the Duke’s on Waikiki beach the following year. 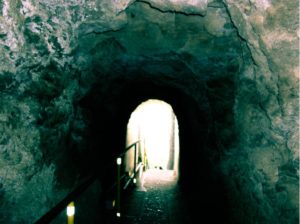 But the view on the other side was amazing! 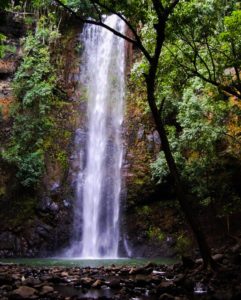 This view was totally worth almost killing two members of our hiking group!

Hawaii sounded like a good adventure, so off we went. While in Kauai we took a crazy raft ride to whale watch that left my knuckles scarred for life. As I was up front with my dad trying not to lose my grip, my husband and mother were at the rear of the raft trying not to lose their lunch. We also hiked two miles through the jungle after a two mile kayak paddle to find the hidden waterfalls that left my mother scarred for life. She claims we tried to kill her on this vacation by dragging her all over a few of the islands hiking, kayaking and generally adventuring. I will admit, she did almost have a heart attack when we dragged her up Diamond Head and again a few days later when my Dad found a rope swing over the water and swung around like a teenager. Not wanting to be outdone in the childlike behavior department, my husband joined the Old Man in running right past several very descriptive warning signs to jump into enormous waves crashing into the beach. After a few minutes they actually resembled the pictures on the signs with arms flailing. They reached their limit for abuse in a matter of minutes and headed back onto solid land winded but laughing. Surprisingly, my Dad didn’t try to surf on this vacation even when he saw the North Shore surf competition twenty feet in front of him. I think he knew that it may actually send my mom over the edge to have to watch him jump onto another surfboard. Most of us came home from this vacation a little battered and bruised but happier than when we embarked on the adventure.

Travel is really just the tip of the adventure iceberg for me, but it’s one of the ways that I learned to be open to the experiences the world has to offer. It was on family vacations that I learned that the best sights were seen when you least expected it and that your day could get exponentially better by not making plans and just heading out. I learned to pack light and skip reservations. I learned to talk to people and ask questions. I learned to say yes as often as possible and to go where the locals go, unless of course that is to a cock fight.

I listened to one of my all time favorite albums while writing this blog (over 3 days!)