That’s What She Said 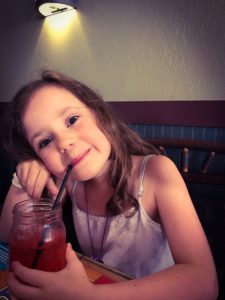 My six year old just handed me her cup that she had filled almost to the top with sparkling fruit water and said “here Mom, have a drink.” I knew this was because she had overfilled her cup so I asked her if she needed me to drink some so she could carry it into the other room. Her response was “Well, yeah… you have big jugs!!” Sometimes it takes me a minute to decipher what this kid is trying to say. She is funny and sarcastic but sometimes her vernacular is a little off. My mind was shuffling through all of the phrases that sounded remotely like the words just uttered and finally came to “you take big chugs” which is what I believe she was going for. That, or she thinks my chest is inflated with bubbly water. I never know what goes on in that kid’s head. What comes out of her mouth leaves me wondering!

Part of the reason for her eccentric vocabulary is that she spends a lot of time with my Dad who has some really interesting sayings. She has spent many summer days running around the backyard hearing “turn on the burners” which may be why she once said to me in the car “turn down the burners lady!” She is apparently getting a little more cautious as she ages. When she was barely five years old she yelled from the backseat at the car in front of us “Go man, go! Are you driving or talking on the phone?” about three seconds after a light turned green. I guess driving with Grandpa is a lot more soothing than driving with me. I understand, it’s hard to be a passenger when mom thinks she’s in a race car. Sometimes there is a little role reversal in the car. A few months ago my little girl said to me “If you you don’t turn down this music, we are going to cancel punk rock in our house!” Again, her vernacular was a little off, but I got the jist of it. 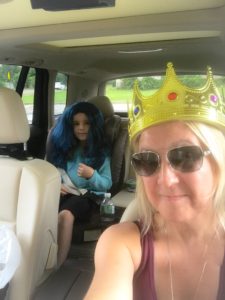 Queen of the road!

I know kids are little parrots which is why I have cleaned up my potty mouth dramatically. Unfortunately when I drop my phone in the parking lot of the gym or stub my toe, instead of swearing my brain now temporarily shorts out and my mouth blurts out things like “God bless America!” or “Son of a Seabiscuit!” People look at me, but my kid has yet to drop an F-bomb in the middle of Target. I almost closed my entire hand in a gym locker last week and screamed “God save the queen!” Apparently in addition to my Tourette’s Syndrome I also become British when in pain. My daughter has yet to repeat any of these phrases. Although she does say “Wow Mom!” a lot when I blurt out such phrases so she must know the meaning behind the actual words is not as it appears.

Occasionally my kiddo says things that are clearly out of the blue. Last week she said to me “JEN, don’t be so hard on me!” when I asked her to pick up her toys so we could leave her grandparents’ house. I can only guess where she picked up that phrase. She also says things like “what in the heaven are you doing?” which I suppose is better than saying hell – which is exactly what I said at the age of four to the Avon lady! So things could be a lot worse. At least she has quit calling me Bloggy!

I wrote this while listening to this awesome album by some chicks who probably drop F-bombs in Target: