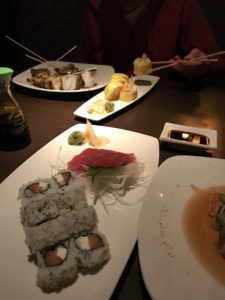 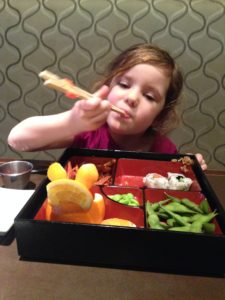 The kid loves her little box of sushi!

When I was a little girl one of my favorite things to do was go out to dinner at fancy restaurants. My parents and their best friends traveled together often with me and my “cousin” who was a year older than me. We ate lavish dinners while on vacation in places like Cancun Mexico, New York and the Playboy Club Resort somewhere in the midwest. You know, because Playboy was known for their family friendly vacations in the eighties! The children were always allowed to order whatever we wanted whether it be filet mignon or chocolate mousse. I don’t know if I ever saw a kids menu as a child – I certainly didn’t order from one!

We also spent many weekends in town going to restaurants like the London Chop House and Machus Red Fox. I was a precocious child and an adventurous eater. I was a foodie before there was such thing as a foodie. On any given dinner outing I would order three or four appetizers instead of an entree. I almost always ordered a shrimp cocktail along with escargot or mussels. I vividly remember ordering octopus for the first time at Pegasus in Greek Town after hanging out backstage at an event at Cobo Hall and getting hypnotized by one of the performers. My “Uncle” Bob used to love to tell the story about the six of us going to a sushi restaurant in the late 70s and me devouring all of the food because the rest of them were more meat and potatoes kind of people. I probably ate my body’s weight in raw fish on that trip to Chicago.

As an Indian Princess I spent many dinners freaking out the other girls with my choice of food. I ate frog legs and eel and anything else that made the other girls gag in disgust. I cracked king crab legs like an Alaskan fisherman as my fellow eight year old diners scarfed down macaroni and cheese and battered chicken lips and buttholes. I gagged right back at them as they ordered what I viewed as food unfit for consumption.

Apparently the foodie gene runs deep. My daughter has been eating sushi since she was two. She has also been ordering her own food since she could talk. The waitstaff at restaurants is still often surprised when she orders for herself at the age of six. I get more compliments about her ability to articulate what she wants than I do about the fact that she was reading the menu before she was five years old! The other night our waiter commented that we could probably drop her off at the door with a twenty dollar bill and she would do just fine dining by herself and paying the bill. I agreed except for the fact that she would order a soda which is strictly forbidden in our house (we don’t consume what we can’t spell). 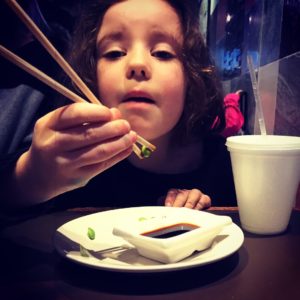 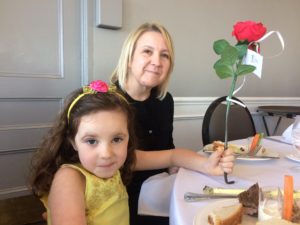 Brunch with Belle at the Grosse Pointe War Memorial

We were at a charity event a few years ago that was a giant strolling buffet with forty or fifty restaurants serving their most popular dishes. As we walked by the Kona Grill booth a waitress who recognized us said “there’s the little girl who orders like a thirty year old!” It’s still amusing to me to listen to my kid order sushi – requesting extra ginger and refusing the chop stick helpers. Nobu Matsuhisa would be proud!

When she was four she almost gave a waiter at Seafire Steakhouse in Atlantis a nervous breakdown when she ordered a $63 lobster duo instead of a $6 kids menu plate of noodles and marinara sauce. He looked from her to me for approval and when I nodded my head he actually pointed at the menu to make sure I was able to read the price. He then looked to her Dad for the same approval and eventually walked away looking a little startled. Of course she couldn’t have chosen the $50 single lobster tail, that simply wouldn’t have been enough shellfish! If I recall correctly she also finished my Dad’s wagyu beef and my tuna before ordering herself a dessert. We set the dining bar high for her in Atlantis when we took her to Bobby Flay’s Mesa Grill when she was a mere thirteen months old. They had to borrow a high chair from a neighboring restaurant because they had an age limit that I ignored while making the reservation. She was the youngest diner they had ever seen and she was better behaved than many of the adults around us. Then again, she was not imbibing in the cocktails that were flowing like the water wall behind us. 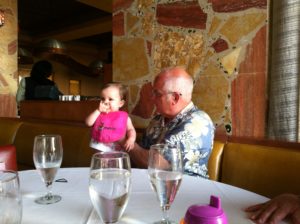 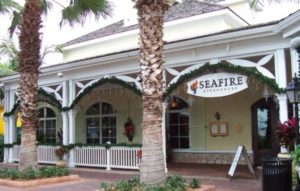 Our favorite restaurant in Atlantis!

I had a conversation with my chiropractor once about the differences between Atlantis and his favorite vacation destination, Riviera Maya, Mexico. One of the main selling points for him was the cheap food in Mexico. We talked about the meal plans in Atlantis and when I told him that we chose not to partake in the plans because the kids had to eat from the kids menus he almost fell over. He proceeded to tell me how he forced his ten and twelve year old children to order from the kids menu on vacation. I proceeded to send him into apoplexy when I shared the story about the lobster tail duo. To him it was a waste to spend more than $10 on a meal for his kids. To me it was child abuse to force feed a child the garbage available on the kids menus at steak houses and high end restaurants.

My love of food never really crossed over to an ability to actually cook my own food. I often burn toast and destroy pretty basic dishes like soup – as evidenced by my disintegrated noodle soup. I have literally set three stoves on fire on three separate occasions. I am more of a consumer than creator when it comes to fine cuisine. My daughter on the other hand is becoming quite the little chef. She cooks with her Dad every week and she finds great delight in preparing dishes for her family, especially on special occasions. I am grateful for this – not so much because it is good for her, but I will most likely need someone to cook for me if anything ever happens to her Dad. I have just started cooking one meal a week so anything could happen!