My husband and I agree on most parenting decisions. One thing we differ on is where we eat meals. I let my kid sit on the family room couch and watch television with a bowl of cereal on most mornings. It is how she eases into her day. I know it is being lazy but I’m not willing to have the battle with her every morning. I am already geared up for the tooth brushing battle, the Mom packs the worst lunches battle and the epic hair battle to which I show up with an arsenal of clips, ties, brushes and two types of detangler. If she has to eat at the table, she will forgo breakfast and go straight to school with no food in her stomach. I pick my battles. We eat dinner at the kitchen table together every night, breakfast isn’t a meal I’m willing to die by my sword over. My husband on the other hand is willing to stand his ground on the all meals should be eaten at the kitchen table rule. So if Dad is home, we eat at the table. 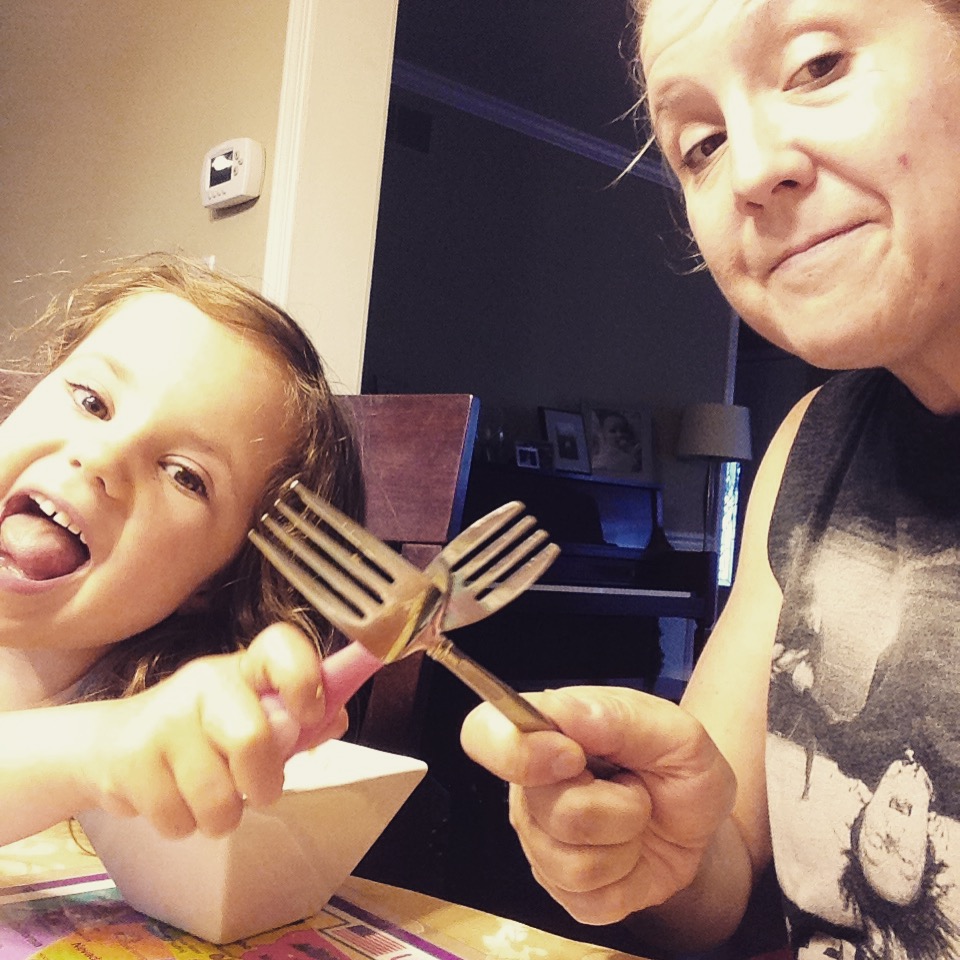 The last time my husband and I had a discussion about this I told him that the reason she would be consulting a therapist at age twenty five would probably have little to do with where she ate her breakfast at age six. His reply was that the discussion was causing him reason to seek a therapist. He couldn’t provide me with one single serial killer who claimed they did it because of lackadaisical parenting though. I’m calling this argument a win for me. I know he picks his battles too. Nevertheless, when Dad is around, meals are eaten at the table. When it’s just Mom and the wee one, we eat wherever we want. Damn the man! 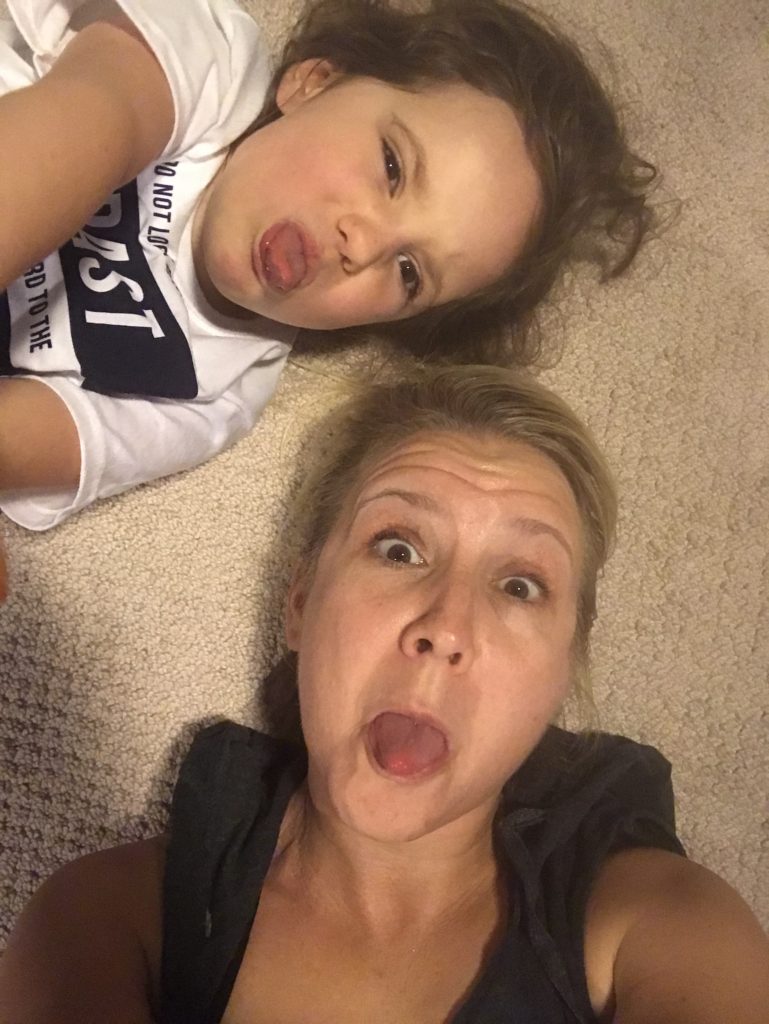 Look at these brats!

I know that this is one of those things where people get all up in arms about parents having to have solidarity and keep a united front and that the child will walk all over me because I am a big sucker for letting her do this one thing. To those people I say, you are welcome to come over to my house and try to talk this stubborn little six year old into doing something she doesn’t want to do at the crack of dawn. I know there are things her Dad lets her get away with that I don’t let her do too. We all try to be the favorite parent at times.

Unfortunately this decision of mine to team up with the wild animal we are attempting to meal train has backfired on me much like the story of poor Pi. She wakes me early on weekends to go downstairs and have breakfast before Daddy gets up. So every Saturday and Sunday I am now awoken by a little finger poking me in the forehead whispering “come on, let’s go downstairs” while Daddy sleeps in. 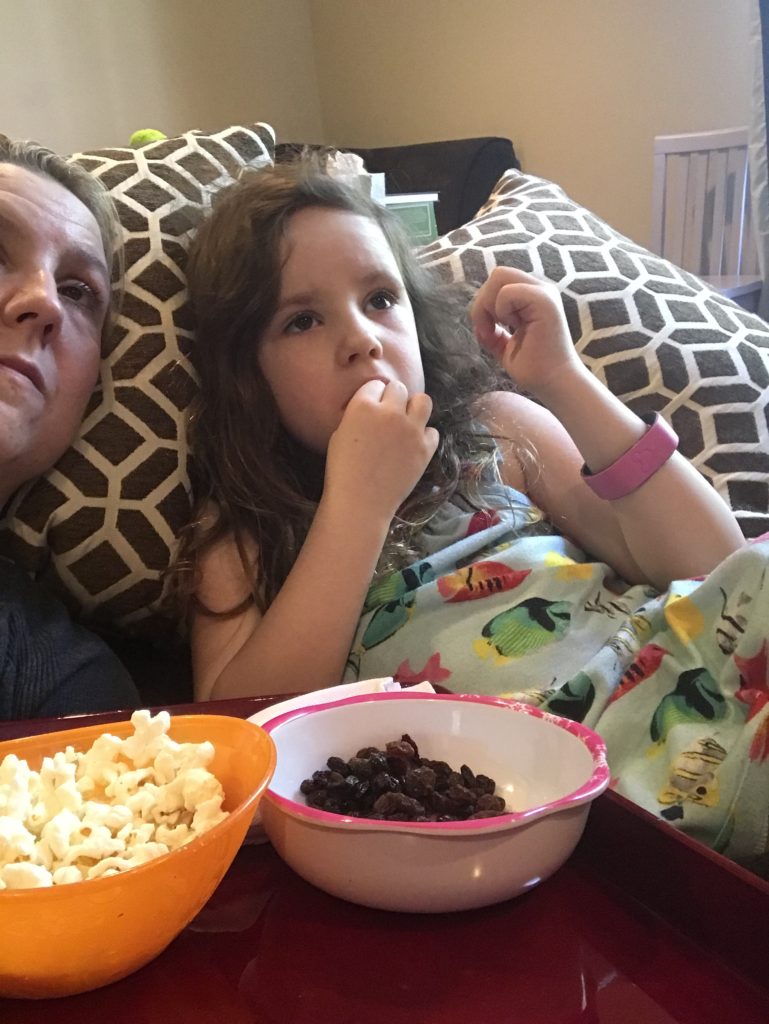 We first have to stop in the guest bedroom and pick up the little table that she has become accustomed to having by her side. This all goes back to when she was sick last month and I set her up on the love seat to rest. I brought down her pillow and a sheet and made a little bed for her so she could watch movies and convalesce. I brought the little table for her juice and water to sit on. Now she wants it every day, and I am the sucker who keeps dragging it downstairs. It now holds her markers as she watches television and sketches while eating breakfast.

The table usually makes it’s way downstairs on Saturday morning and depending on how chaotic the weekend gets, it remains in place until Sunday night when we pick up the house for the week. Sundays tend to be busy however, so a lot of times the little table sits there waiting to be used which leads us back to how we ended up eating breakfast in the family room on week days. My daughter gets out of bed reluctantly most mornings, but when she makes her way downstairs and finds her little table set up next to the love seat she gets excited, knowing she won the battle. She gets that sparkle in her eye, like a little victory torch as she gives me her breakfast order and sends me off to the kitchen to scramble an egg and butter a piece of toast. 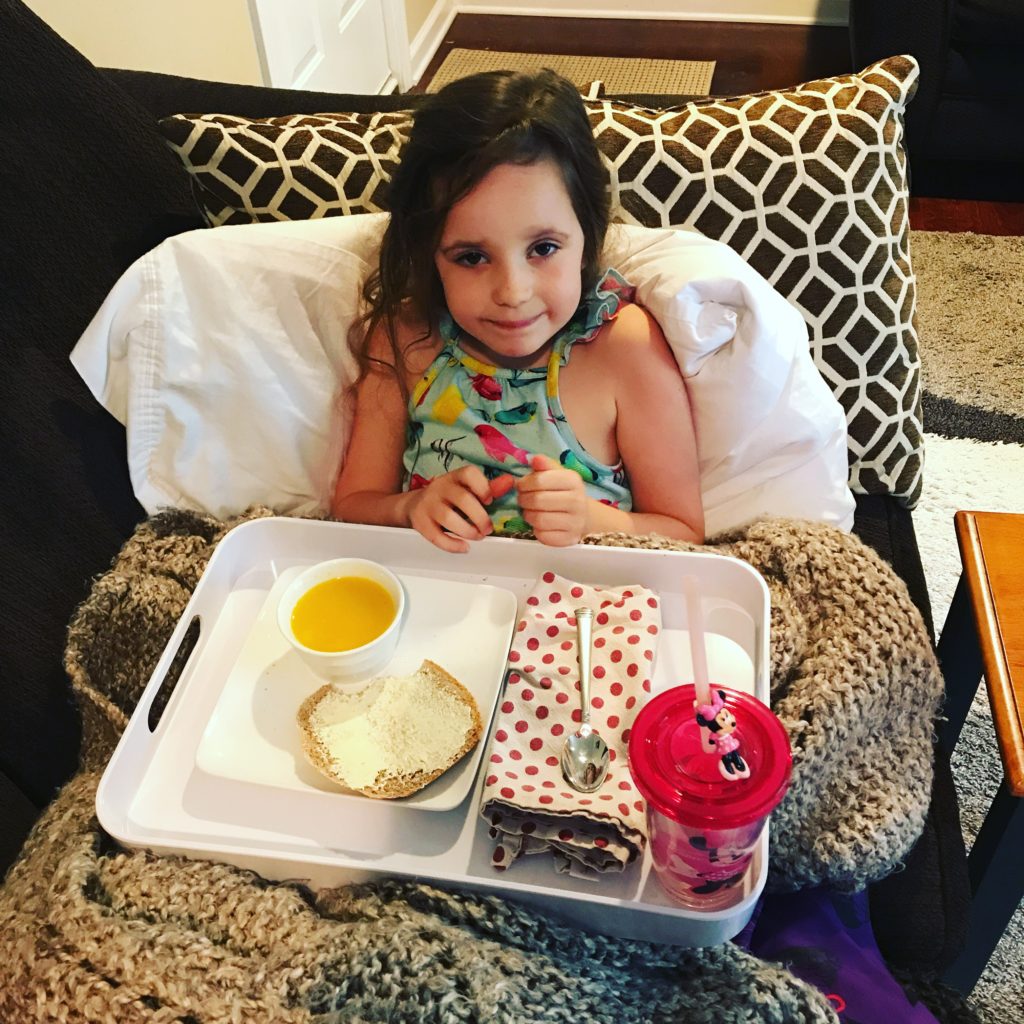 Sick girl on the couch

When she came downstairs the other morning she found her Dad ready to make her breakfast. Her little table was gone. She asked her father where the table was and he replied that he had put it away where it belonged. Her response was “That table is mine and it belongs right here!” She promptly marched me into the guest bedroom where the table normally resided to find it missing. My husband had taken it into his studio to hold a computer speaker. The man won this round.

Later that day he showed me ants making their way around the couch leg. I directed him to the ant traps under the other couch leg and told him maybe he needed to get more. We have had ants in this room since we moved into the house and I have only been letting my kiddo eat in here for the last three years! He put out more ant traps. The other night my daughter told him that she killed an ant on the floor by her pottery wheel. Now I am wondering who’s side she is on. I almost told her to quit telling her Dad things like that because she is ruining her breakfast for the next day but I bit my tongue. He just looked at me and smirked.

But I have found the solution for all of our breakfast problems that will make everyone happy. I was talking to my friend about this little issue and she told me about how she used to eat breakfast as a kid in a laundry basket on the family room floor watching cartoons. She never thought about why she did it, but maybe her Mom let her do it to prevent her from getting crumbs on the floor. Yesterday I dragged our laundry tub into the family room and threw a blanket in it. When my daughter came down for breakfast I told her to climb in and I would bring her a bowl of cereal. She didn’t even question me, she just climbed in.

When we were all at the dinner table having dinner last night I told her to tell her Dad about where she ate her breakfast. When she did he just looked at me in disbelief. I almost reminded him that my Dad let me spray paint one of my bedroom walls as a teenager so the laundry tub in the family room will one day be a really minor thing in his memory, but again I bit my tongue. This morning when my daughter and I were walking downstairs for breakfast she said “don’t forget my bucket.” Folks, I think we have a winner!! 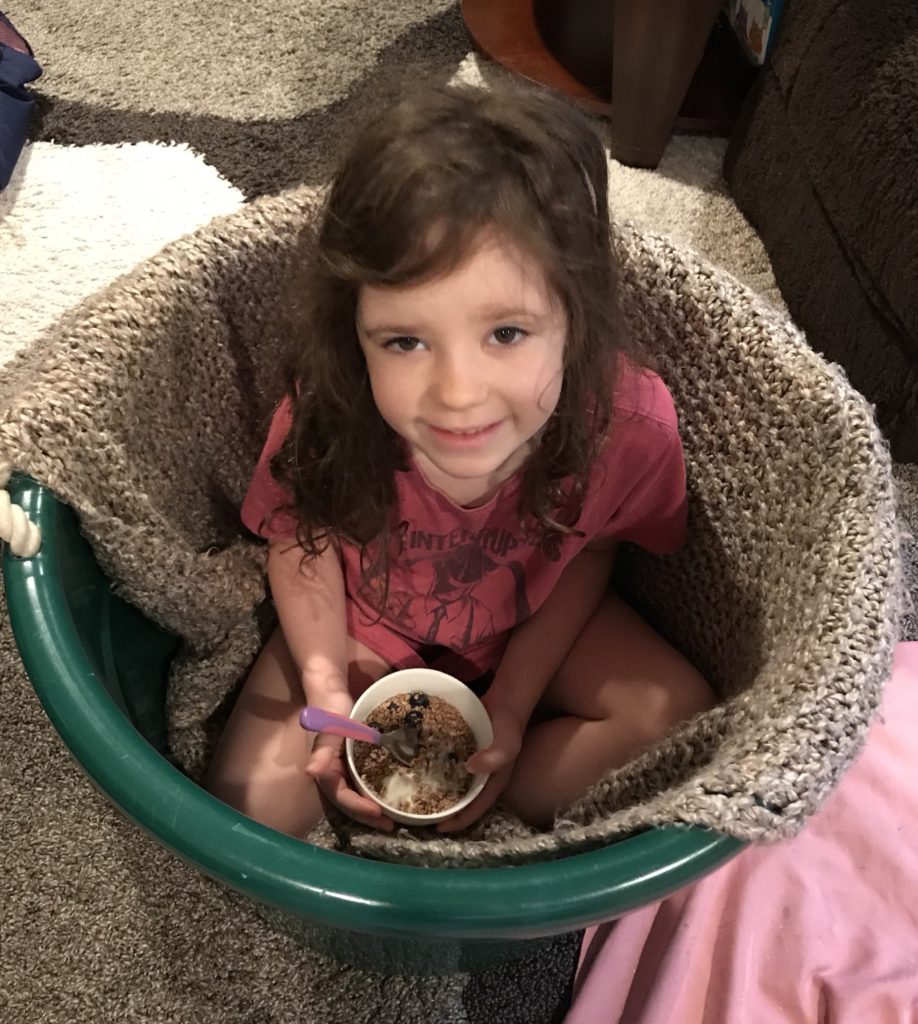